Amid risks of Russian retaliation over Lithuanian restrictions on Kaliningrad, the High Representative Josep Borrell emphasised on 20 June that the country is not taking its own initiative but “only applying the EU sanctions”.

On 20 June, Russia defined as “openly hostile” the limitations that Lithuania applied to rail shipments of EU-sanctioned goods transiting from Russia to Kaliningrad – a Russian exclave in Lithuanian territory – and threatened severe retaliation. Borrell, speaking to journalists after the Foreign Affairs meeting in Luxembourg, denied the country is “guilty” of applying unilateral national restrictions. Indeed, he said, the EU sanctions foresee restrictions over imports and exports of certain goods, “including the prohibition of transit for those goods through EU territory.” And, if the European Commission is ready to double-check the legal aspects to be sure everything is correct, he said, the fact that Lithuania is somehow responsible is “pure propaganda.”

Propaganda is currently a significant headache for the EU, as Russia is blaming Brussels’ sanctions for a possible future famine. While the EU just agreed to extend the measures for one year, it is also preoccupied with showing that a food crisis would rather be the result of Russian aggression against Ukraine. The Head of EU diplomacy said he intends to send African leaders a letter explaining the sanctions. For the European Union, it is crucial not to alienate unaligned nations at a time when the bloc is busy finding new partners, including possible energy suppliers and geopolitical allies.

In this respect, the meeting was also an opportunity to strengthen bilateral relations with several countries, including Egypt and the Gulf Region, but also New Zealand. 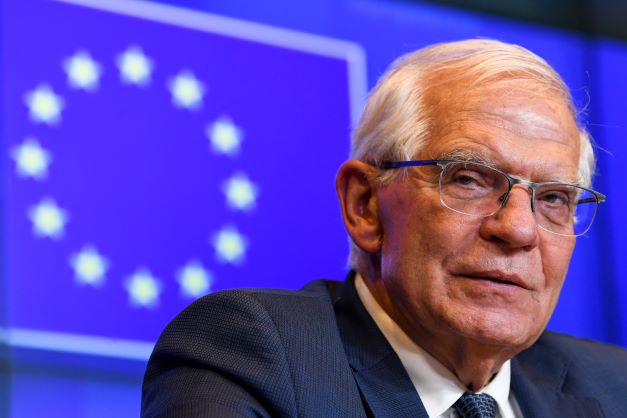 Josep Borrell, the EU High Representative, holding a press conference after the Foreign Affairs Council in Luxembourg (Photo: Council of the EU)