Modernisation include improved control and navigation systems, multi-functional colour LCDs, advanced radars and extended range of weapons. 558 Aircraft Repair Plant also offers establishment of logistic and maintenance centres in order to support the aircraft within its entire life circle. “We, like every company, want to expand our network of contacts and partners,” explained a representative of the company. “That is why we decided to come to LIMA 2017. We want to show our programmes and capabilities just like we showed them in Europe, South America and Africa. We already have partners in Malaysia and Indonesia.”

Aside from repairs, overhauls and modernisation, 558 Aircraft Repair Plant presented several other elements of its portfolio, including tactical unmanned systems, such as BERKUT-1 (intended for day and night reconnaissance operations) and BERKUT-2 (also for target designation duties). At its stand the company showed the “unmanned aircraft complex” known as BLIK T-558-1, with a maximum payload of 20kg and a radius of action of 300km. Its maximum flight duration at cruising speed (100 km/h, maximum 160 km/h) is 6 hours. Operating range of BERKUT-1 is up to 15 km and of BERKUT-2 up to 35 km. While both land with a parachute, BERKUT-1 takes off from hand and BERKUT-2 is launched from a catapult. 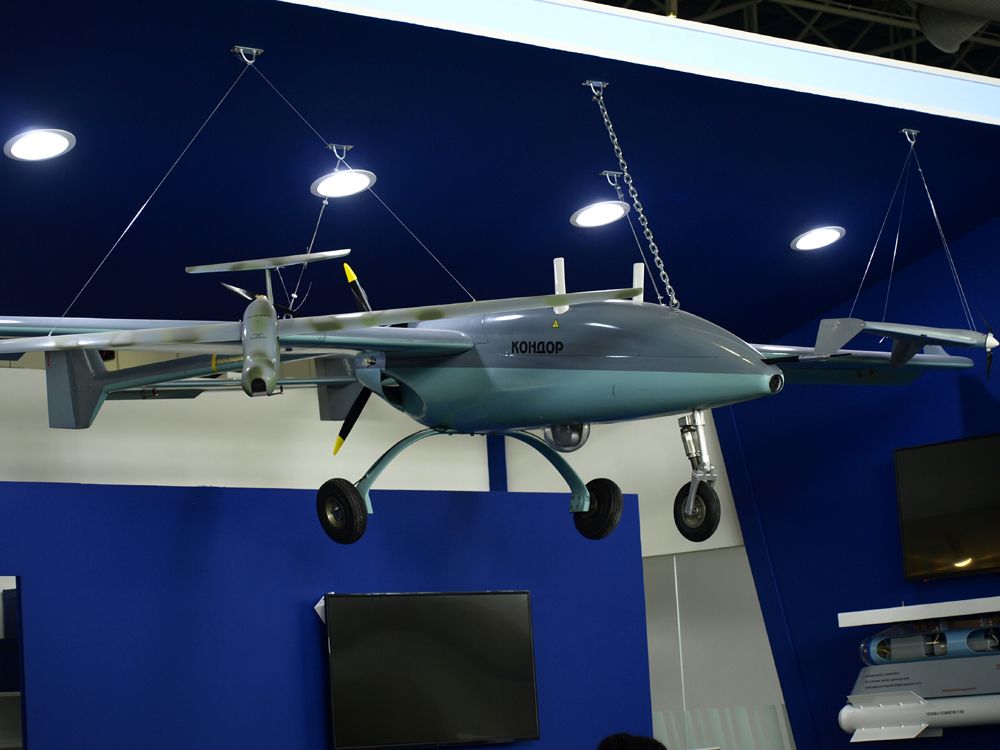 Also, the company presents the SATELLITE-M individual airborne ECM protection system against high-precision radio-controlled weapons, launched from air and land. According to the provider, the SATELLITE-M additionally provides protection in front and rear hemispheres (+/- 60 degrees in azimuth and +/- 45 degrees in elevation) against missiles with semi-active and active-radar homing warheads, while at the same it does not affect the efficiency of the aircraft’s own combat systems. Frequency band is tailored according to customer needs. The system is made of two containers under wing, while a control-and-display unit is installed in the cockpit. The 558 Aircraft Repair Plant states that the SATELLITE-M system can be issued against all major aircraft, including Su-27, MiG-29, Su-30MKK/MK2/MKI, F-15, F-16, F-22, Mirage-2000, EF-2000, Tornado and particular missiles, including P-37P, AIM-120, AIM-7, MICA, P-77, short range ADMSs such as Tunguska, Osa or Roland, medium range such as Buk-M1 and Patriot.

Another Belarusian stand was of the SFTUE (State-Owned Foreign Trade Unitary Enterprise) Belspetsvneshtechnika Minsk, which demonstrated models of air-defence missile systems “Pechora 2BM”, ADMS “Kub”, “Igla” MANPAD, as well as optical and optronic devices. The joint Belarusian stand featured presentations of JSC “KB Radar” and OJSC “Display “Design Office”. The latter presented the ADUNOK automatic remotely controlled weapon stations in two variants – marine version and a standard one (ADUNOK-W). In a typical configuration it has the NSVT 12,7 machine gun and AG-17A grenade launcher (up to 50 grenades) as well surveillance and target acquisition camera. Other types of weapon can be mounted on the customer’s request. Laser rangefinder has a detection range of 2500 metres, while for thermal camera it is 1000 metres and 2000 metres for a video camera. It has +/- 100 degrees of horizontal observation and from -5 up to +60 of vertical observation.