The term counter insurgency (COIN), as applied to aircraft, dates back to the Vietnam conflict when North American Rockwell’s OV-10 BRONCO won a competition for a light armed reconnaissance aircraft for the USMC and US Army in 1964. Used operationally in Vietnam from the beginning of 1968, the OV-10 was also acquired by the USAF. The twin-turboprop aircraft was then withdrawn from US service in 1995 and never replaced, although that may be changed by the current USAF Light Experimental Examination (LAE) programme.

Previously known as OA-X, LAE is designed to find a cheaper and more effective way for the USAF and partner air arms to conduct close air support (CAS) in permissive environments. As an official explained to MT, “The USAF has had to come face to face with the knowledge that sometimes we are flying fifth-generation aircraft against targets that are often just a single person, and that’s not cost effective.”

Phase 1 of the experiment took place in August 2017, and involved the Sierra Nevada Corporation (SNC)-Embraer A-29 Super TUCANO, the Textron Aviation AT-6B WOLVERINE, the Textron AirLand SCORPION, and L3 Technologies-Air Tractor’s AT-802L LONGSWORD. Following this initial phase, the A-29 and AT-6B were designated as Tier 1 for meeting all USAF requirements, while the SCORPION and LONGSWORD were classed as being Tier 2 for meeting some of them.

The Air Force Materiel Command’s (AFMC) Air Force Strategic Development Planning and Experimentation Office is leading the campaign. “Rather than do a combat demonstration, we have decided to work closely with industry to experiment with maintenance, data networking and sensors with the two most promising light attack aircraft, the AT-6 WOLVERINE and the A-29 Super TUCANO,” commented Secretary of the US Air Force (USAF), Heather Wilson. “This will let us gather the data needed for a rapid procurement.”

Further experimentation will examine logistics and maintenance requirements, weapons and sensor issues, training syllabus validity, networking and future interoperability with partner forces. The air force will also experiment with rapidly building and operating an exportable, affordable network to enable aircraft to communicate with joint and multi-national forces, as well as C2 nodes.
“This effort to find a lower-cost and exportable aircraft for permissive environments is directly in line with the National Defense Strategy,” observed USAF Chief of Staff, Gen David Goldfein. “A light attack aircraft would not only provide relief to our 4th- and 5th-generation combat aircraft, but also bolster our interoperability, so we can more effectively employ airpower as an international team.“

As a result of the LAE, the USAF expects to have the information it needs to potentially buy light attack aircraft in a future competition, without conducting a combat demonstration, based on data collected during the first round of the experiment and future data anticipated to be collected in the next phase of experimentation.

One of the technologies the USAF has demonstrated during Phase 2 of the LAE campaign is the AERONET international datalink system, which involved the A-29 Super TUCANO and AT-6B WOLVERINE aircraft. The USAF developed AERONET as a shareable tactical data network for light attack aircraft, designed to be an affordable and commercially secure tactical datalink supporting line-of-sight/beyond line-of-sight (LOS/BLOS) real-time information exchange between airborne and ground units.

The Embraer A-29 SUPER TUCANO is a versatile aircraft powered by a single Pratt & Whitney PT6A-68C turboprop, capable of carrying out a wide range of light air support (LAS) missions that include operations from unimproved runways. The A-29 has accrued more than 40,000 combat hours in military theatres worldwide and is the only aircraft in its class with a USAF military type certificate. It has been selected by 14 air forces on three continents and is the only certified, combat-proven light attack aircraft currently in production in the world.

The aircraft was also the winner of an earlier USAF competition. In 2010 the service issued an LAS aircraft requirement for the Afghanistan National Army Air Corps (ANAAC), to be fielded by 2013. This programme called for a fixed-wing, single-engine turboprop platform, with a number of critical requirements, including a rough-field capability without ground support, dual controls, ejection seats, specific air-to-ground weapons and systems and a defensive-aids system.

Following a protracted and protested selection process, in February 2013 SNC-Embraer were awarded a U$427.5 million contract to supply 20 A-29 Super TUCANOs for the ANAAC, now the Afghan Air Force, to be built in Jacksonville, FL, as well as ground-based training equipment, pilot and maintenance training, and logistical support.

Following the initial Afghan contract, an additional six aircraft were ordered and in June 2015 the US State Department approved a possible Foreign Military Sale (FMS) to Lebanon for an estimated cost of $462 million – to be built by SNC-Embraer.

A similar FMS contract for the government of Nigeria for 12 Super TUCANOs and weapons, including associated training, spare parts, aviation and ground support equipment, facilities and infrastructure, with an estimated value of $593 million, was approved in August 2017. In November the same year, Embraer announced it had received an order from the Philippine Air Force (PAF) for six aircraft, valued at $99 million, to replace the PAF’s venerable OV-10s, the world’s last operational BRONCOs.

For its ISR role, it is equipped with the Lockheed Martin A-10C combat mission systems and the L3 WESCAM MX15Di EO/IR multi-sensor suite. The AT-6 is currently competing with the A-29 in the USAF LAE programme, but has yet to achieve any sales.

A total of 24 AT-802Us were delivered to the United Emirates Joint Aviation Command and four more to the Royal Jordanian Air Force (RJAF) in 2016, in addition to six that were donated by UAE. In RJAF service, the aircraft are currently being upgraded to increase weapon options. Iomax in Mooresville, NC, modified the first aircraft to Block 1B standard with a new armament control system and strengthened weapons pylons to allow carriage of Raytheon‘s 500 lb/227kg GBU-12 PAVEWAY II, while the Roketsan laser-guided CIRIT is also an option.

After clearing a series of legal hurdles, an FMS contract for 12 L-3 LONGSWORDs, valued at $418 million, was finally approved for the Kenyan Air Force at the end of 2017. L3 has rebranded the AT-802 as OA-8 LONGSWORD for the Asia-Pacific region markets.

The United Emirates Joint Aviation Command replaced its AT-802Us with a fleet of 24 Iomax ARCHANGEL Border Patrol Aircraft (BPA). Based on the Thrush S2R-660 crop sprayer, the two-seat ARCHANGEL provides extremely long endurance, with an aircraft specifically designed for operations in rugged, austere environments. It has a fixed reinforced landing gear for hard-landing survivability on rough field operations and features easy access for maintenance in the field or fixed base operations. The Pratt & Whitney PT6A-67F turboprop powers the MTV-27 MT Propeller 5-blade propeller, allowing for shorter take-off distances, reduced acoustic signature, increased rate of climb and cruise speed and an ability to operate up to 7,620m (25,000ft) with oxygen. With a large wing area designed for heavy payload capacity, its 2,177kg (4,800lbs) external stores can include GBU-12/58 bombs, AGM-114 HELLFIRE missiles, and CIRIT 2.75in Laser Guided Rockets. The ARCHANGEL has fully integrated night vision-capable front and rear glass cockpits and, in addition to direct support missions, is capable of undertaking SCAR, FAC-A, base defence, and convoy escort missions.

Iomax is planning to add an air-to-ground radar to the ARCHANGEL, offering either a podded Thales I-MASTER lightweight ground surveillance radar or a Leonardo OSPREY 30 lightweight AESA radar. The latter would be fully integrated into the aircraft internally, with two arrays in the wing leading edges. This would provide synthetic aperture radar (SAR), ground moving target indication (GMTI) and sea surface moving target indication.

Another platform adapted to the light attack reconnaissance role is the AC-208 COMBAT CARAVAN, developed by Alliant Techsystems (ATK), later Orbital ATK, now Northrop Grumman from the single engine Cessna 208 GRAND CARAVAN light passenger and utility aircraft. Powered by the ubiquitous PT6A turboprop, it was developed under the US COMBAT CARAVAN programme as part of the government’s effort to rebuild the Iraqi Air Force (IAF): five aircraft had been delivered by 2010.

The USAF Aeronautical Systems Center issued sole-source contracts to Orbital ATK to procure, modify and deliver Cessna 208B aircraft to the AAF in an armed ISR configuration, plus three for the Lebanon Air Force. Two ISR-configured C-208B aircraft have been supplied by the United States to the Philippine Air Force and others to several African countries, including Cameroon, Chad, Kenya and Niger. The armed-ISR configuration Block 2 version was redesignatd by Orbital ATK (now Northrop Grumman) as the AC-208 ELIMINATOR, seven of which are being delivered to the Afghan Air Force.

In September 2018, Northrop Grumman opened its new AC-208 Training Center of Excellence at Meacham Airport in Fort Worth, TX. Designed to provide partner nations with aircrew and maintenance training, initial training sessions will last approximately four months and include pilot and mission system operator training. Upon graduation, the partner nation aircrew members will be fully trained to operate the AC-208 ELIMINATOR.

Taking part in Phase 1 of the LAE campaign was the SCORPION, the sole pure jet-powered contender. Powered by two Honeywell TFE731 geared turbofan engines, the tandem two-seat aircraft weighs in at 9,660 kg (21,250 lb), more than twice that of the A-29 SUPER TUCANO. Relegated to Tier 2 in the LAE, it has yet to attract any orders.

Nevertheless, a number of countries have selected light attack variants of advanced jet trainers (AJT) including the Chinese Hongdu K-8 and L-15, the Russian Yak-130 and the Korean KAI FA-50. However, for those air forces conducting LAS missions in uncontested airspace, single-engine turboprops remain the light attack/ISR aircraft of choice.

David Oliver is a senior defence reporter and a regular contributor to MT. 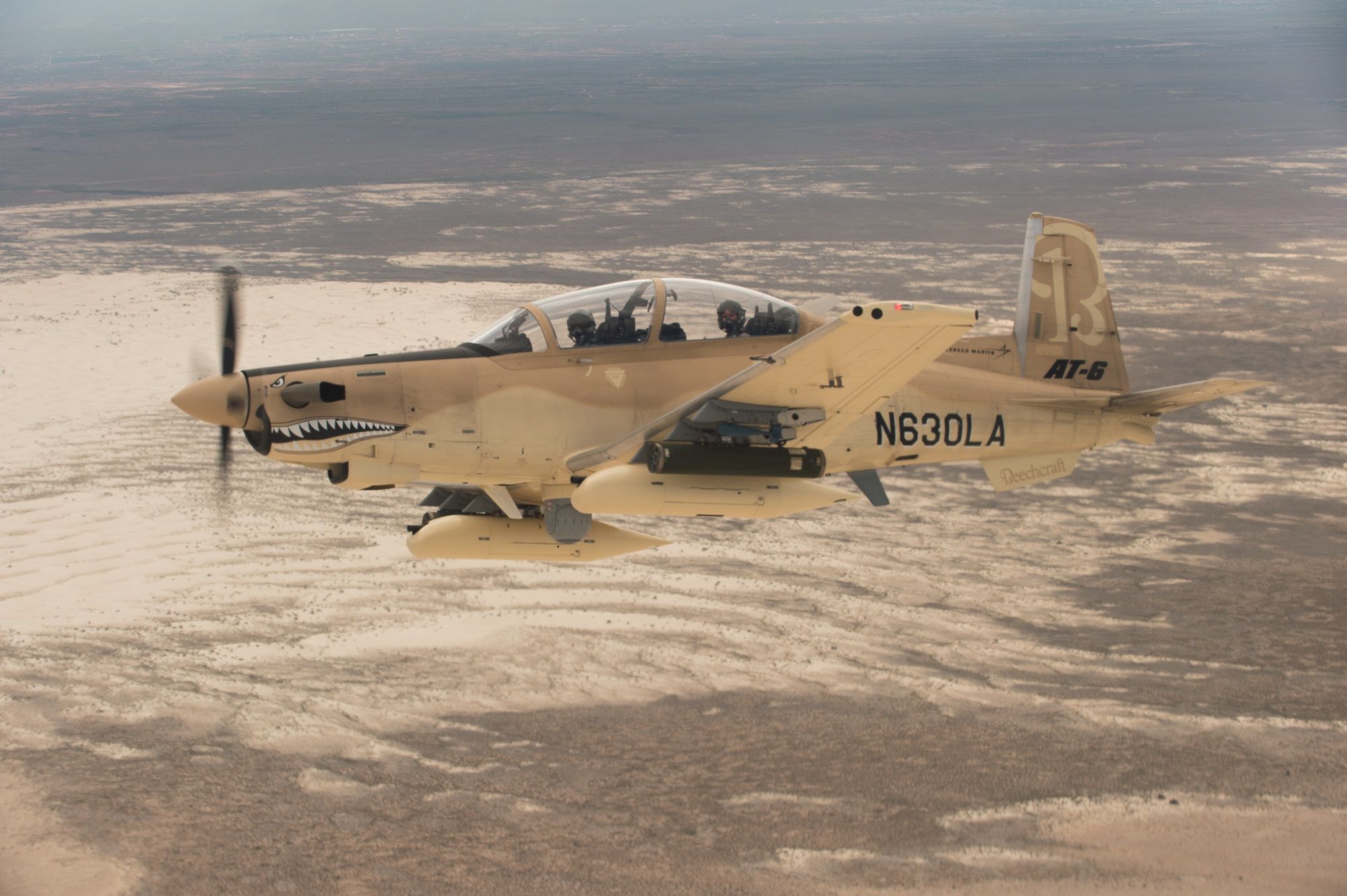