Liebherr and GM Partnering in Fuel Cell-based Generation for Aerospace

General Motors and Liebherr-Aerospace have agreed to collaborate on development of a HYDTROTEC hydrogen fuel cell technology-based electrical power generation system for aircraft applications. The companies will explore possiblities to leverage Liebherr’s strong position as a leading on-board aircraft systems supplier, coupled to GM’s leadership in hydrogen fuel cell technology, to develop an integrated system, customised to the performance and economic requirements of commercial aircraft – though the development will inevitably have an impact on military aerospace also.

A demonstrator will be based on GM’s HYDROTEC hydrogen fuel cell technology and will be built and tested in a specialised laboratory multi-system integration testing facility at Liebherr-Aerospace in Toulouse. It will incorporate GM’s precisely crafted fuel cells, HYDROTEC power cube and fuel cell system, along with the company’s controls and models.

The companies are pooling their skills for this project. Lower emissions and lower noise than conventional aircraft operation: with these fuel cell advantages, among other things, both companies see a great opportunity for use in aviation. GM, through its relationship with Honda, is one of the world’s most advanced fuel cell developers in many industrial fields, now entering into aeronautics. GM’s fuel cell business benefits from decades of investment in engineering and manufacturing expertise with high volume processes that can bring economies of scale to fuel cell production.

“Aircraft are a great litmus test for the strength and versatility of our HYDROTEC fuel cells,” commented GM Executive Director – Global HYDROTEC, Charlie Freese. “Our technology can address customer needs in a wide range of uses – on land, sea, air or rail, and this collaboration with Liebherr could open up new possibilities for aircraft, transitioning to alternative energy power sources.”

“The change from the conventional to a hydrogen technology-based electrical power generation system means major systems modifications on board the aircraft that could result in better, more efficient performance of the plane. This we want to prove and test thoroughly. The advantage of GM’s HYDROTEC fuel cell technology is that it has shown promise in extensive automotive and military programmes, where it has shown to be reliable from the engineering and manufacturing perspectives. We are developing low emissions aerospace solutions,“ explains Francis Carla, Managing Director and Chief Technology Officer, Liebherr-Aerospace & Transportation SAS. 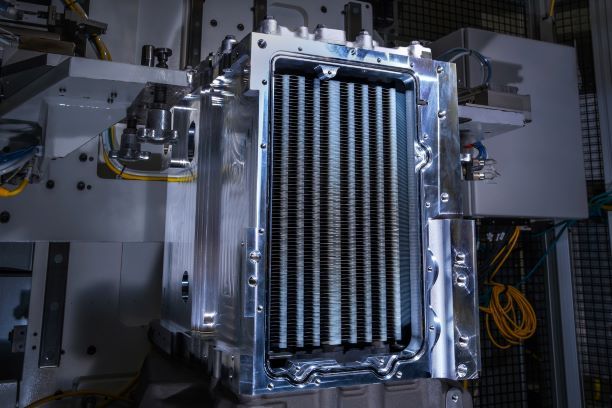 The collaboration is based on GM’s HYDROTEC technology, as illustrated by this hydrogen fuel cell stack. (Photo: General Motors)