Following the release of the Request for Tender for Australia’s Land 400 Phase 3 Mounted Combat Capability programme, companies have been displaying their offers at Land Forces Asia 2018.

Rheinmetall has brought along its LYNX KF41 infantry fighting vehicle (IFV) prototype first displayed at Eurosatory in June. According to a spokesperson from the company it is the only prototype of the vehicle and it will begin testing later this year.

The spokesperson from Rheinmetall told MONCh that systems inside the vehicle need to be qualified by Rheinmetall followed by tests to see if it will meet the requirements set out under Land 400 Phase 3. The programme will replace the Australian Army’s existing M113AS4 tracked vehicles but the tender will close in March 2019 so there is not much time for Rheinmetall to complete its tests.

This is due to start later this year when the vehicle returns to Germany following the attendance at a couple more defence exhibitions. Rheinmetall has also started ordering parts for the construction of two further prototype vehicles that must be delivered to the Australian Army by 2020 in order to participate in the programme.

The spokesperson said that the parts are for the welding of the hulls of new Lynx vehicles as the chassis of the vehicle has already been proven so the company can proceed with this level of build.

On display the LYNX is fitted with a 35mm WOTAN automatic cannon on a LANCE 2.0 turret and inside there is space for nine people. In addition to the main gun LYNX can be fitted with an anti-tank guided missile.

According to the spokesperson because Lynx is modular it means that the IFV can host a range of different mission modules that make its suitable to meet the requirements of the RFT. These include the IFV version, a field ambulance, recovery vehicle, repair vehicle, as well as other variants if requested.

He added that although Rheinmetall already has the PUMA IFV it does not meet the RFT requirements because that vehicle is specifically designed for the German Army – It is expensive and has a remote turret rather than the manned turret specified by Australia.

The company stated that for KF41 production it will use local suppliers for development, production and lifecycle support of the vehicle as well as procurement of ancillary items. It highlighted the includes of products from Supashock, Milspec and Cablex as Australian companies that already have items included in LYNX.

A ballistic armour package can protect against anti-tank weapons, medium calibre ammunition, artillery shrapnel and bomblets in addition to a mine and IED package. An active defence system is also available.

The 1,100 horsepower engine offers a top speed of 70km/h and an operational range of 500 kilometres.

The range of sensors available can include the Stabilised Electro Optical Sight System (SEOSS) that includes a stabilised digital TV and IR optic and laser ranger finder with a fire control unit for gunner and commander. Rheinmetall also offers is Acoustic Shooter Localisation Systems (ASLS). Unmanned modules are also possible, the spokesperson said.

Although LYNX is an entirely new and unproven vehicle, Rheinmetall could be considered a front runner in the competition because it was selected for the Land 400 Phase 2 Combat Reconnaissance Vehicle element of the programme. Under a contract awarded in August it will build 211 BOXER 8×8 wheeled armoured vehicles for that will replace the ageing ASLAV vehicles. The company also secured the Land 121 phase 3B contract for army trucks.

As a special MONCh treat, please find the LYNX unveiling at Eurosatory 2018. 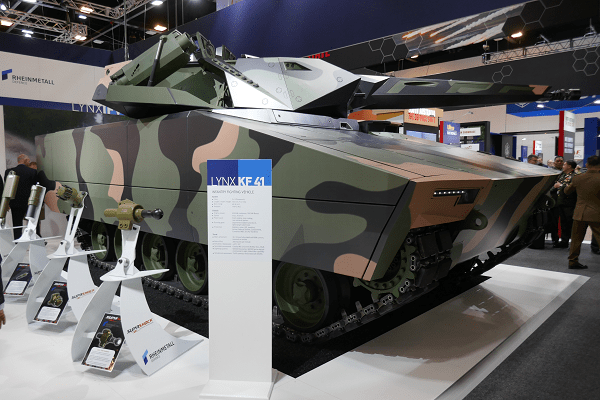