The new RWS is designed so that it can be fitted to lighter armoured vehicles such as the HAWKEI and BUSHMASTER 4x4s. A spokesperson from EOS confirmed to MONCh that the system had been test fired from both these vehicles and would enter production this year.
The R150 can hold weapons or any calibre from 5.56mm and 7.62mm up to .50cal (12.7mm) as well as a 40mm grenade launcher. Its reduced weight means that fewer structural alterations are needed for lighter vehicles with a thinner roof to be able to mount this kind of weapon.

R150 weighs just 110kg with a 7.62mm gun and increases incrementally with larger calibre guns, but it means that a RWS option is now available for vehicles such as a HMMWV or trucks. The spokesperson said that it is the only light RWS on the market that can mount a .50cal gun.

EOS also produces the larger R400 and R600 RWS but each of these are well over 100kg heavier and only suitable for heavier armoured vehicles. The spokesperson said that if a customer wants to mount a gun up to .50cal then there is no need to buy the heavier systems, although the mount is interchangeable and can host both the R150 and R400 that can be switched over in 20 minutes in a plug and play fashion.

In comparison the R150 retains most of the capabilities of the larger RWS. It is stabilised; it has the same range and accuracy with the same weapon; the same fire control system; and can even reach an elevation of 85° – almost straight up – unlike the larger RWS.

The only limitations are that the R150 is a 2-axis gun not a 4-axis system and its EO/IR sensor is attached the gun, unlike on the R400 which has a sensor that can move independently to the gun. The R150 also has less ready to fire ammunition storage.

The spokesperson said that demonstrations have been planned with customers early in 2019 and that the Netherlands has a new vehicle programme out to tender so it is up to EOS to negotiate with the vehicle OEM. He added that the R400 is already in the Dutch inventory.

R400 is already in the Australian Army inventory fitted to the BUSHMASTER and has been selected as the RWS for the BOXER Combat Reconnaissance Vehicle. 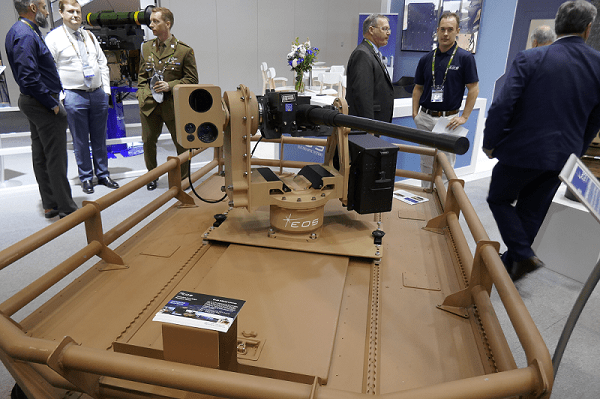