As deliveries of night fighting equipment to the Australian Defence Force (ADF) continue, further capabilities are being investigated.

L-3 Oceania was selected under Tranche 1 of project Land 53 1BR to provide night vision binoculars, a laser range finder and pointer and a laser with white light system.

A second instalment of equipment under Tranche 2 has also been initiated by Defence. It stated that it has, “started a procurement process to identify and acquire technology that meets requirements by augmenting, supplementing and/or enhancing its current night fighting capability.”

An invitation to register interest (ITRI) was released in June and calls for, “the supply and support of night fighting technology that will augment, supplement and/or enhance the night fighting capability currently being delivered under Tranche 1 of Project LAND 53 Phase 1BR.”

The ITRI added: “Government Approval of any acquisition under Tranche 2 of the project is expected to be sought in 2020, with supply of approved Tranche 2 equipment and support services commencing thereafter.”

A shortlist of ITRI bidders will be made before a limited Request for Tender is release in late-2018 that will be followed by a test and trials programme in 2019.

Defence said that Final Materiel Release is expected in 2023 and, “achieved with final delivery of the equipment and support arrangements for the equipment.”

L-3 Oceania was unable to comment on Tranche 2 because of the state of the bidding but a spokesperson from the company did say that the company had set up an in-country support facility in Brisbane to maintain the products it is delivering under Tranche 1.

It was built as part of the technology transfer agreement for the project and opened in 2017 and includes equipment such as alignment stations for lasers and pressure testing for the underwater environment. The facility means that repairs and modifications can be done in Australia without the need to ship the products to the US speeding up the ability to turn around items back to the ADF.

L-3 secured the Tranche 1 contract in 2016 and is delivering the AN/POS-31 binocular night vision device (BNVD); the Squad Range Finder (SRF) device; and the AN/PQ-16B laser and white light combination. The company is also delivering Wilcox G24 helmet mounts. Deliveries started in 2017 and Defence said that following operational test and evaluation at the ADF’s School of Infantry it, “resulted in the introduction of a hard case to stow the binocular night vision devices and changes to the training programme.”

According to the L-3 spokesperson the company is delivering about 18,000 BNVDs, about 4,000 SRFs and another 4,500 AN/PQ-16B devices which represents a significant “uplift” in night fighting capability for the Australian Army. Deliveries are due to be completed in early 2020.

He said that the binoculars are replacing monoculars in army service because they offer better depth perception, a wider field of view and improved resolution levels and that not even big European armies have binocular for their soldiers.

The spokesperson added that the SRF has been specially designed for weapon mounting as many laser range finders are just handheld devices. The weapon mount means that can be attached to the picatinny quad rails on most modern rifles including Australia’s new EF88 and carbines. He added that it is a small light device that is suitable for the infantry soldier and does not need a 10,000m range but can achieve 1,000m needed for operations. 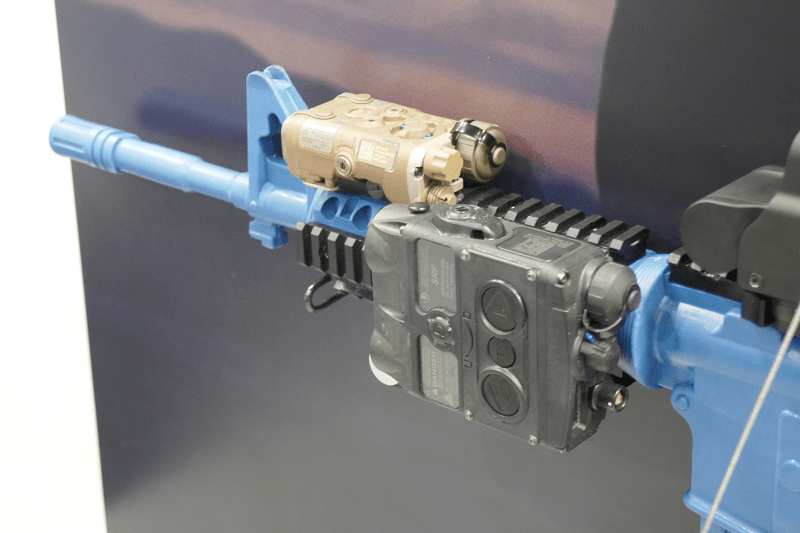