”It Will Keep You Alive in a Combat Zone”

Maj.Gen. David Coghlan, Head of Land Systems at the Australian DoD’s Capability Acquisition and Sustainment Group (CASG) procurement organisation, said at Land Forces 2018: “HAWKEI is a brand new vehicle; we are facing a few reliability issues … they are not huge, but it is a developmental vehicle so it will take time and if you look under the bonnet of a HAWKEI you will see why. But it will keep you alive in a combat zone.”

According to Thales Australia, 138 vehicles will be delivered under the LRIP programme, with 30-40 completed since February and the remainder due by April next year for the Initial Material Release stage. The vehicles are about to start user trials at the end of September and more hours being lifted by a CHINOOK are required in order to qualify for the air mobility role.

A total of 1,100 vehicles are on order. HAWKEI is being built at the Thales BENDIGO facility, where full-rate production will begin from mid-2019, with total deliveries completed within 18-20 months. About 60% of the vehicles will be 2-door variants with a flatbed at the rear: the remainder will be 4-door variants.

HAWKEI is Australia’s first vehicle designed as a digital platform. A Thales executive said the LRIP vehicles are fitted with a new Integrated Computing System (ICS) that supports a Generic Vehicle Architecture capability and display applications, no matter which operating system they use, and a battle management system feed into the vehicle. It has the same radio fit as the BUSHMASTER and can take feeds from the sensors on BUSHMASTER and view them in the HAWKEI.

Using the ICS, an operator can access the radios, geographic information systems and control a remote weapon station. Upgrades are completed with software rather than hardware changes, so a full-rate production software drop will upgrade the ICS to include new features such as a DTCS air support/fire support capability.

The LRIP vehicles have already been exposed to an operational environment. “We deployed two HAWKEIs to Iraq and Afghanistan to test them in that environment. In Iraq they did not do too many [kilometres], but in Afghanistan they did 11,000. It is a new vehicle, there is not anything like it on the market – the JLTV is not yet deployable: they are a couple of years away from that,” Gen. Coghlan commented.

Not only is it a digital vehicle – it also offers a high level of protection for a light vehicle. “It is different from the BUSHMASTER, which is designed to keep you alive and hopefully drive away. HAWKEI is designed to sacrifice the wheels to take the blast and keep you alive, primarily designed to be used in the rear of the combat zone, recon roles, etc.,” explained the general. 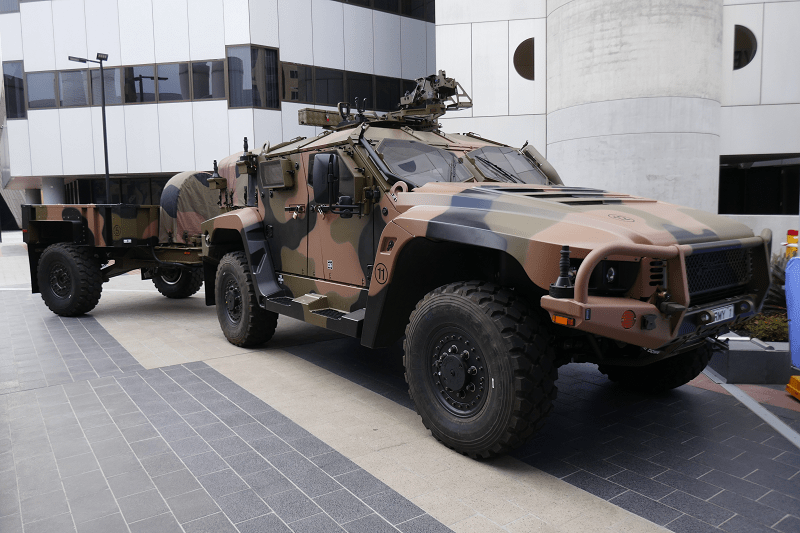