As companies line up to compete for the Australian Army’s new Mounted Combat Capability (MCC) programme Land 400 Phase 3, General Dynamics UK announced itself as a contender with its AJAX family of armoured vehicles.

The company has brought an APOLLO variant of the AJAX vehicle to the Land Forces Asia 2018 exhibition to show its modular capabilities and prove its maturity. AJAX has been selected by the British Army for its armoured reconnaissance capability in its future Strike Brigades.
The APOLLO on display – called a Fitter vehicle in Australia – is the first vehicle that will be ready for sale to the UK once it returns from Australia and gets re-painted in British Army livery.

A spokesperson from GDUK told MONCh that the common base platform, on which all the AJAX variants are based, will meet five of the nine types of vehicle requirements demanded under the Land 400 Phase 3 programme. It will only require the installation of Government Furnished Equipment – such as the EOS Remote Weapon Station (more on the RWS here).

The remaining four types of vehicles will be met by a new Infantry Fighting Vehicle (IFV) variant of AJAX that will still use the common base platform but with the addition of a new turret developed by GD North America fitted with a 30mm gun. This will meet the requirement for an IFV, APC, C2 and Joint Fires vehicle. Using a common base platform means that 70% of the parts across all nine vehicle types will be the same offering considerable reductions in maintenance costs.

Following the closure of the RFT in March next year, there will be an evaluation period before a downselect to two final bids, which will be contracted for the risk mitigation activity (RMA). The spokesperson said that the company will build 2-3 vehicles for the RMA that is due to start in the third quarter of 2020 that will last 15 months. It will test lethality, survivability, mobility and performance in Australian conditions.
A high proportion of Australian industrial involvement will be required and the spokesperson said that GD will set up an Assembly,

Integration and Testing (AIT) facility in Australia similar to that established in the UK for the Ajax programme at Methryr in Wales. This can be offered because the employees that set up the facility can still provide that capability and the company is looking at potential locations in Australia for the site though this would depend on skills and availability.

One of the benefits highlighted was that because the UK requires seven prototype platforms there is a host of engineering and performance data that the spokesperson said could be shared with Australia. This would reduce the time and cost of performing additional tests or at least provide data to measure against to accelerate the schedule.

According to GDUK the AJAX family has payload growth of 3t and digital architecture growth of 500% offering some level of future proofing. That it will be a proven vehicle in British Army service also gives the company some confidence in the maturity of the platform and low level of risk associated with selecting the platform. 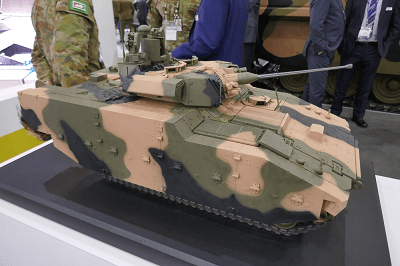