Eastern Shipbuilding Group, as prime contractor, has let a contract to Leonardo DRS for the auxiliary propulsion system (APS) for the fourth shipset in the US Coast Guard’s new Offshore Patrol Cutter (OPC) fleet, the company announced on 6 December.

This platform marks the first combined diesel electric or diesel propulsion system application for the Coast Guard. Under the contract, Leonardo DRS will provide its high-performance, permanent magnet motor-based APS, an integrated hybrid electric drive system has been optimised to meet the USCG’s operational tempo, and provides capability for much more efficient operation at slower speeds, increasing mission duration, reducing emissions, and providing emergency take-home capability in the event of a failure of the main propulsion diesel engines. When coupled to the main propulsion gearbox, the system allows the ship to operate quietly and efficiently during loitering operations, while providing superior fuel economy for increased on-station operations and capability.

Maximising use of the electric drive increases the platform’s green credentials and reduces operational time on the main propulsion engines, providing additional multiple benefits. Because electric motors are virtually maintenance-free, life-cycle costs over the vessel’s planned 40-year life are minimized, by reducing maintenance hours needed on the engines.  Using propulsion diesel engines at slow speeds adds significant wear and tear on the engines, and increases the potential for coking/wet stacking.  By adding this electric APS, the Coast Guard can expect a built-in advantage of reducing not only fuel and maintenance requirements, but total life-cycle costs and increased fleet safety.  The main engine overhaul cycle, typically planned at 15 years, can be extended to 25 years.

The APS has been proven in multiple applications.  The system includes two of the most power-dense permanent magnet motors on the market today, providing significant advantages in size, weight, efficiency and performance over conventional electric induction motors, and producing more torque from the same amount of supplied current.  Their smaller footprint allows greater flexibility in engine-room design and increased cargo space, and their simpler, more rugged construction results in proven reliability and durability. 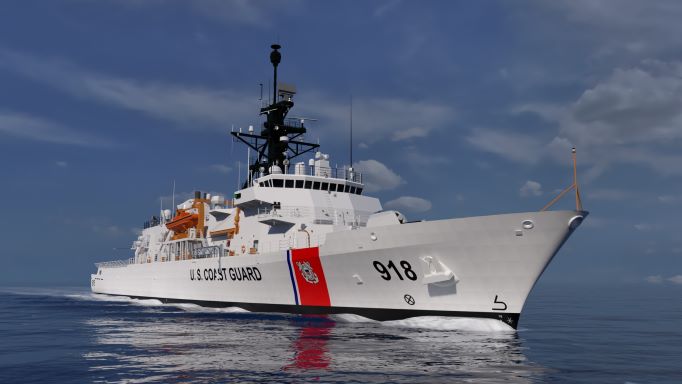 The APS will be applied to the fourth OPS under construction for the USCG. (Photo: Leonardo DRS)