From Zero to Hero: The Light Combat Aircraft

T-X is likely to radically change the Light Combat Aircraft (LCA) landscape, and will undercut the cost of any serious western competition

Last September, the Boeing-Saab partnership won the USAF’s U$9.2 billion T-X trainer contract, covering up to 351 jets and 46 simulators. Such economies of scale mean the aircraft’s likely unit price is under $20 million. We are likely to see a lighter fighter version too, with a radar, air-to-air missile (AAM) and/or gun, and a beefed-up attack version that would add modern precision guided munitions. With a two-man aircrew, the CAS workload can be shared, and five hardpoints allow for a targeting pod to occupy the centreline station. Targeting pods identify then guide smart munitions on to a target using a built-in laser-a useful ability when working with Joint Terminal Air Controllers (JTAC), who could receive downlinked images on their ROVER terminal from the overhead aircraft, then pinpoint the area to be attacked or investigated.

The Korean Aerospace Industries (KAI)/Lockheed Martin team and Leonardo both lost out to Boeing in T-X, and are now offering their own LCAs, which evolved from jet trainers.

While the Republic of Korea Air Force (RoKAF) acquired 62 KAI/Lockheed Martin T-50 advanced jet trainers, it also purchased 22 TA-50s in the counter-insurgency/light attack role. Its high cost deterred many would-be operators, but an offensive capability was introduced and offered through the US Foreign Military Sales (FMS) programme. This saw Indonesia, Iraq, Philippines and Thailand all order the LCA version, though none went through a formal competition. Indonesia took delivery of 16 T-50Is in 2013/14; Iraq started deliveries of its 24 T-50IQs in February 2017; the Philippines now operates 12 FA-50PHs and Thailand has 12 T-50THs on order to replace its L-39ZA/ARTs.

Leonardo is now marketing the M-346FA, a fighter attack version of its M-346 advanced jet trainer that serves the air forces of Israel, Italy, Poland and Singapore. The new FA features upgraded avionics and an additional two wingtip stations carrying AAM. At Farnborough 2018, the M-346FA was displayed with a GRIFO 346 radar installed. “We are targeting the aircraft to be operational with the radar by 2020,” Leonardo’s Eduardo Munhoz de Campo told MT. The simulated weapons and sensors on the aircraft have been replaced by the real thing, Mr de Campo added. “A reconnaissance pod and targeting pod have also been integrated and we are open to including GPS and laser-guided AAM with a complete Defensive Aid Sub System (DASS).”

Aero Vodochody’s original L-159 Advanced Light Combat Aircraft (ALCA) has served the Czech Air Force since 2004, but it was the Iraq Air Force (IQAF) which exposed the jet to its baptism of fire in 2016/17. The IQAF took delivery of ten single-seat L-159s in 2015 and were trained in its tactical use by the Czech Air Force’s Air Advisory Team (AAT) in Balad. During the campaign to oust Islamic State, the IQAF Chief, Gen Anwar Hamad Amin, told MT “the jet attacked 419 targets and dropped 859 Mk 82 500lb bombs.”

Aero is also developing a light attack version of the L-39NG, which made its first flight last December. The Senegalese Air Force is believed to have ordered four, which should be delivered in 2020/21. “Evolving a light attack version from a basic trainer configuration but armed, means there doesn’t have to be any structural modifications. The only drawback can be the design of the aircraft, which might make a role quite difficult [….] Our light attack aircraft will not need to be switched between training and attack, it has been designed as one system. It’s up to you whether you want to put real weapons on or not,” Aero Vodochody Vice President, L-39NG, Marco Venazetti, told MT last year.

Unfortunately, the current L-159 does not have a targeting pod. However, as the IQAF Chief told MT at the Bahrain Airshow last November, “it definitely needs it and we will integrate the Aselpod system soon.”

“The basic light attack L-39NG will have two 350l wet-wings, and [will be] cleared for Mk 81 (250lb)/82 (500lb) laser-guided/freefall bombs, CRV-7 unguided/guided rocket launchers and single/twin barrel gun-pods. The latter will be available on the centreline as well as on two underwing pylons, should the customer need more fire-power. This benchmark will satisfy 80% of our customers,” added Mr Venazetti.

With the L-39NG’s wet-wings, there is no need for fuel tanks on the wingtips. For self-defence the AIM-9L SIDEWINDER or PYTHON V AAM could be fitted on the two outer hardpoints.

BAE Systems has been fairly successful with its two-seat light attack HAWK Mk 100, equipped with wingtip missile launch rails, advanced attack avionics and a modified nose to house optional forward-looking infra-red (FLIR)or laser sensors. With advanced weapons training capabilities, the Mk 100 was attractive enough to be acquired by the UAE Air Force (Mk 102), Oman (Mk 103), Malaysia (Mk 108) and Indonesia (Mk 109) air forces. Another development is the single-seat Mk 200 series, primed for the air-superiority and ground-attack roles with an APG-66H radar and a pair of 25 mm ADEN guns. Exports of this variant have been made to Oman (Mk 203), Malaysia (Mk 208) and Indonesia (Mk 209).

India will also arm its HAWK Mk 132s with guns and rockets, to act as a force multiplier. The COMBAT HAWK will have a payload of around 3,000kg across seven hardpoints, which could include a laser designator pod, precision guided munitions and a helmet-mounted display.

Many western companies look enviously at the grip on many so-called third world air forces exercised by Aerospace Industry of China (AVIC). The Chinese offer good capability with some very attractive financing deals. Over 700 single-engined Hongdu K-8s have been sold, mainly to third world countries, configured for advanced jet trainer or light attack roles. The most recent, the light attack K-8W variant, with a glass cockpit and weapons delivery system, was launched in 2007, after the advanced jet trainer (AJT) version made its first flight in 1990. Bangladesh and neighbouring Myanmar have both taken delivery of the K-8W, which lacks a radar, but can provide a good ‘bang for the buck’ with its five hardpoints. A 23mm gun or laser targeting pod can be mounted on the centreline, while smart weapons such as 50 or 100kg LS-6 laser-guided bombs can be mounted on the outer underwing pylons, as can the HF-20 rocket launcher and PL-5E or YJ-9E AAM, while smaller training bombs can equip the inner pylons.

Due to sanctions, AVIC only offers the K-8 with the Ukrainian Motor Sich AI-25TLK turbofan engine, which often suffers from a spare parts shortage. Pakistan is a partner on the K-8, operating around 40 K-8Ps but with the Honeywell TFE731 turbofan.

Hongdu also offers two versions of the L-15: while the L-15A was predominantly a trainer, the L-15B’s primary role is what the Chinese refer to as ‘command and attack’. It has strakes blended into its wing, fuselage and leading edge flaps. The L-15B has an impressive nine hardpoints to enable a flexible weapons loadout, including two 500kg or up to six 250lb bombs as well as a targeting pod. For self-defence it can carry two PL-5EII on the wingtips and up to six SD-10A AAMs. The Zambian Air Force has been operating six L-15Bs since 2016.

After three decades of development, India’s TEJAS LCA was awarded its final operational clearance (FOC) by the Indian Aeronautical Development Agency (ADA) in February. It comes nearly six years after achieving initial operational clearance (IOC) and almost three years after the first TEJAS Mark 1 squadron stood up at Sulur in southern India, in July 2016. FOC involves beyond visual range (BVR) missile capabilities, with I-DERBY being the main BVR weapon. Other aspects include air-to-air refueling, air-to-ground weapons and general flight envelope expansion. Four more TEJAS LCA in IOC configuration were due to have been delivered to the Indian Air Force (IAF) in March, bringing the total number of operational aircraft to 16. The IAF has 40 TEJAS Mark 1s, including eight two-seat trainers on order. The first batch of 20 will be in IOC and the second batch in FOC configuration. The IAF has repeatedly said that the TEJAS Mark 1 variant does not meet the service’s specifications and operational requirements. FOC aircraft are set to enter production at Hindustan Aeronautics in Bangalore this year, with a new assembly facility being set up at Nasik by 2020 to increase annual production from eight to 16 aircraft. The IAF is expected to place an additional order for 83 TEJAS: 73 single-engine Mark 1As and 10 dual-seat trainer aircraft.  The Indian Ministry of Defence is expected to issue a request for proposal soon. 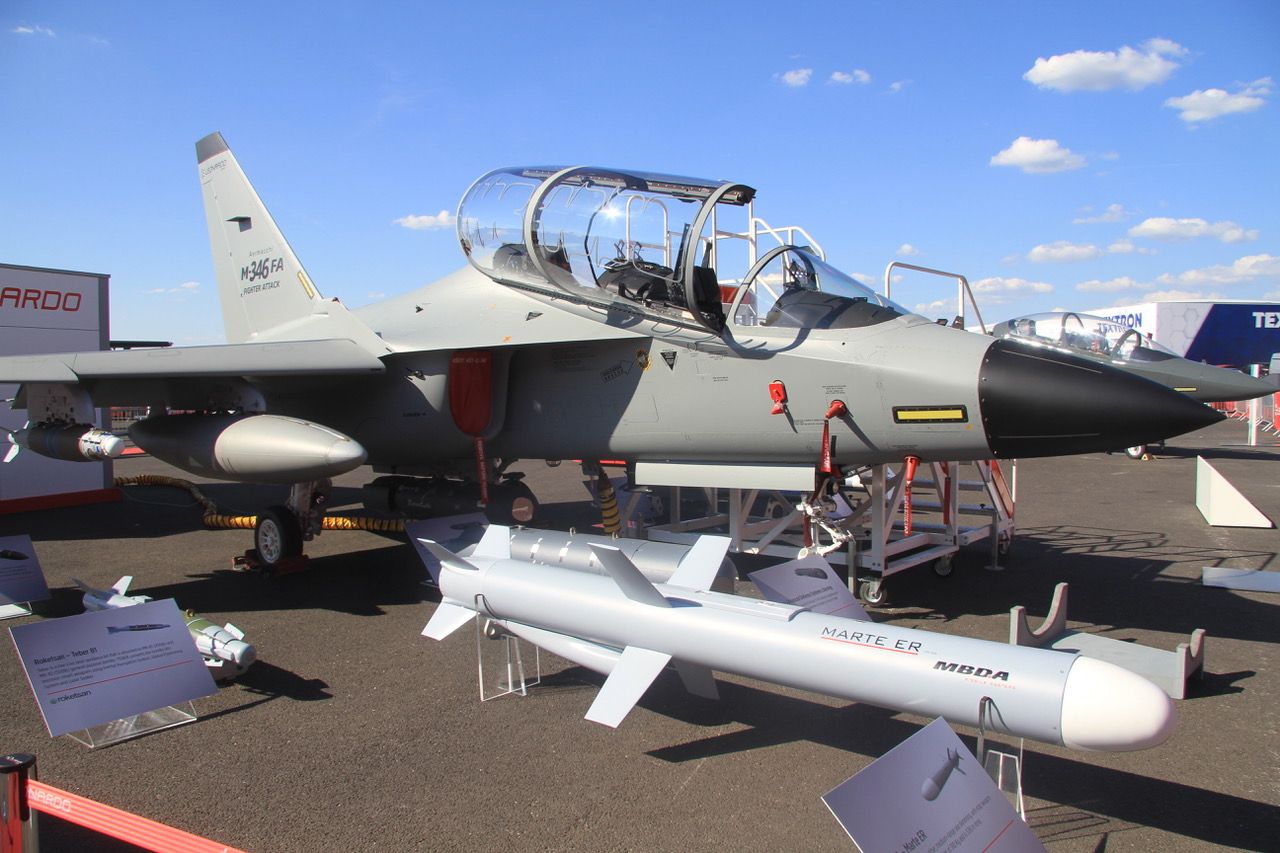