Korean Air and KRIT to Collaborate on Stealth UAVs

Korean Air announced on 22 December that it will work together with the Korea Research Institute for Defense Technology Planning and Advancement (KRIT) on a project to research and develop technologies for the next generation of stealthy unmanned aerial vehicles (UAVs).

Under a recently signed agreement, which will run until 2025, the company will examine the application of high-performance, low-observable technologies to reduce the radar cross-section (RCS) of UAVs. As part of the project, the firm has also formed a consortium with six Korean institutions specialising in low-observable technology, including the Korea Electronics Technology Institute (KETI) and Inha University, to develop materials for radio wave absorption and surface current control. The move comes after the company revealed in September that it had been selected as the preferred bidder for KRIT-led research on vehicle structure technology for next-generation UAVs.

Korean Air has been designing and manufacturing UAVs, as well as developing stealth aircraft technologies, for over a decade. In a five-year project from 2010, it produced a tailless low-observable UAV prototype, known as the Kaori-X, that has been used as a technology demonstrator. The aim is to develop a tailless, stealthy UAV that can operate autonomously and/or in ‘loyal wingman’ mode.

From 2013-2016, Korean Air managed to further reduce a UAV’s RCS by using undisclosed multifunctional composite materials. And, since 2016, the firm has been working on the application of high-performance, radar absorbing structures for use on UAVs.

The latest developments come after Seoul announced in August plans to increase the budget for the procurement of locally-developed UAVs more than six-fold within a year, as part of efforts to help the domestic UAV industry develop “stable demand for growth”. 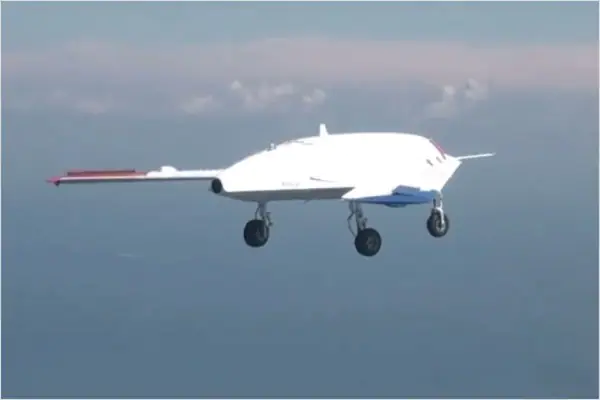 How a stealthy Korean UAV might appear. (Image: Korean Air)