“Several dozen” howitzers will be delivered to the formation, stationed close to Moscow and regarded as one of Russia’s premier combat units. It is typically the first recipient of the latest equipment; it received the first T-90M ‘Breakthrough’ MBTs in April 2020, for example.

A typical Russian howitzer battery consists of a battery HQ and two sections of three guns. If the MoD statement of “several dozen” Koalitsiyas is taken to mean three dozen, this would be sufficient to equip six batteries or two battalions, either to support 1GTA’s manoeuvre elements, or provide separate artillery battalions.

The first Koalitsiyas were delivered for trials in 2020, and in 2021 the MoD reported that 18 would be delivered to the Taman Division, part of 1GTA. It is not clear how this announcement relates to the 2021 statement, but it is possible those deliveries were not made.

It is notable that the specifications provided by MoD appear to have been toned down from the language originally used to describe the system. Its rate of fire is listed as over 10rpm, whereas previous claims were that it would exceed 17. However, the range of the system is still claimed to be 70 kilometres.

The howitzer is based on the hull of a T-90 tank and includes automated systems that automatically adjust elevation and provide firing solutions based on requests via the system’s digital radio. It represents an improvement over the extant 2S19 Msta SPH, which is currently the most capable howitzer in Russian service. Koalitsiya will add to the firepower of Russia’s manoeuvre formations by increasing both range and rate of fire. The digitalisation of the system will theoretically enable shorter targeting cycles, assuming that it can be integrated with the existing Strelets reconnaissance C2 system. 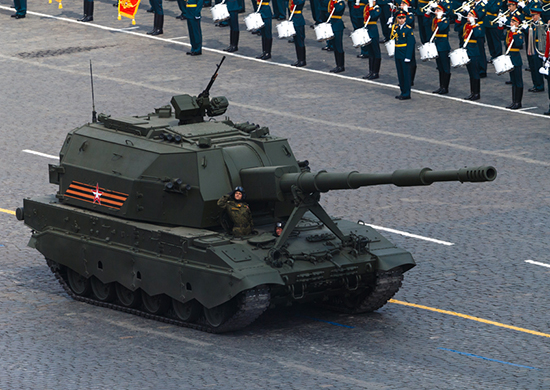 At least two battalions of the 2S35 Koalitsiya-SV SPH will be delivered to Russia’s 1GTA in 2022. (Russian MoD)