The KAPARA, and the REDBACK as well for that matter, have the neat backstory: Phillips designed them specifically for cutting fruits and vegetables, after he decided to eat healthier in order to lose weight…So, the drop point blade is quite long for a folder that size as to better slice those cucumbers and tomatoes and carrots. But before drifting into the culinary realm any further, let‘s take a look at the KAPARA‘s specs first.

Its overall length is 210mm (closed 119mm) with a full flat blade length of 91mm (edge length: 87mm) and blade thickness of 3mm, weighing only 94 grams. The handle is made out of carbon fibre while the steel is CPM S30V (59-60 HRC). It features a high strength compression lock.

The first thing that stands out, when you unpack the KAPARA is how light it is for its size. With 94g it weighs less than your average chocolate bar. The second thing that will blow your mind is how awesome the carbon fibre handle looks! It‘s grained and the different fibres gleam in different shades from very dark to light grey. The handle also has a skeletonised liner set for the very well working compression lock. The handle profile is comfortable, due to a finger choil for the index finger. What really makes this handle stand apart is the red G-10 back spacer, reminiscent of the red-backed namesake spider. In combination with the grained carbon fibre, this makes the Spyderco KAPARA a real eye catcher. Also, there‘s a lanyard hole in the handle, that I put paracord through almost immediately in fear of losing another knife by just relying on the clip.

The CPM S30V blade is pretty hard for a stainless steel: 59-60 Rockwell. Out of the box, the KAPARA is crazy sharp. And I really mean: crazy sharp!! My left arm is almost completely hairless now, because I couldn‘t believe how well it shaves and how much fun shaving with the KAPARA is. Needless to say, that the KAPARA had to cut the paracord it was going to be leashed with and the blade went through it like butter.

All cutting that I have been doing with the knife so far was effortless. Tomatoes are always a good test for the cutting abilities of a knife and the KAPARA slices them like I wish all my knives would. And the best: no sign of the blade getting blunt so far.

There are no gimpings on the blade and I can live with that. As you might expect, there‘s the signature Spyderco thumb-hole, so the blade can be opened with both hands one-handedly.

The blade also features Phillips‘ signature. And why not. If daVinci signed his Mona Lisa, Phillips should have any right to sign his knife, because it‘s just as much a piece of art. Maybe even more so, because it actually serves a purpose instead of just being silently gawked at by millions of tourists. But that‘s just my opinion. The Mona Lisa is quite decent, too.

The Spyderco KAPARA has a reversible pocket clip, made out of wire, because somehow you have to make those 94g right? All in all, the KAPARA is a great everyday carry (EDC) and/or kitchen knife. To be honest, I wouldn‘t take it with me on one of my outdoor adventures, because it‘s just a too beautiful knife to be dragged through the mud and wood and I don‘t know how well the blade would hold up…but we’ll try!!

If you‘re looking for a light, crazy sharp, extremely well designed EDC with a special touch (that red backspacer!!) in the middle to upper prize range, the Spyderco KAPARA might be your knife. Verdict: 8 out of 10. 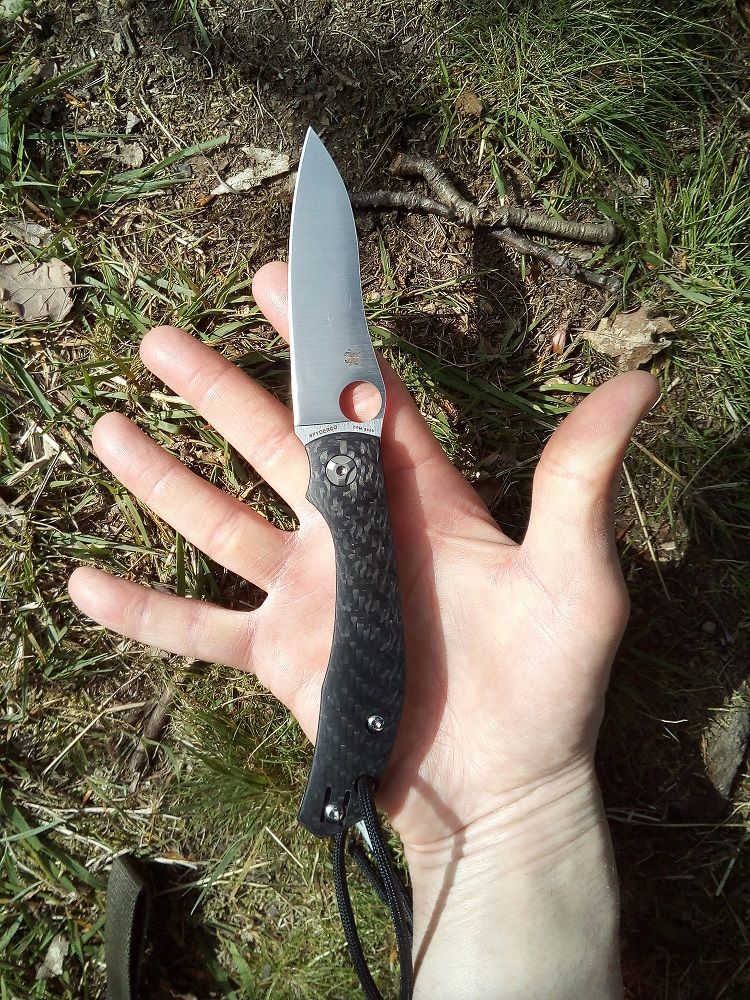