Draken Europe and Collins Aerospace have agreed to use the latter company’s Joint Secure Air Combat Training System (JSAS) on the former’s fleet of FALCON 20 aircraft to deliver operational readiness training to the British armed forces, the companies announced on 13 July.

The pods are based on the Common Range Integrated Instrumentation System (CRIIS), extensively used for training and analysis by the US services. Initial trials on Draken’s FALCON 20s will be conducted by the end of the year. Once cleared, they will operate under Draken’s current MoD contract to provide near real-time combat training information to be viewed and used for debrief immediately after landing. This level of interoperability is made possible by the Multiple Independent Levels of Security (MILS) architecture, which ensures classified data is protected when shared across platforms with the same security levels.

The agreement between Collins Aerospace and Draken goes beyond system provision; it includes a commitment to seek opportunities to demonstrate the technology more widely with coalition partners and to use it as a platform for introducing virtual and constructive training effects to benefit UK Defence.

“Our continued investment in this area, together with our extensive operational experience, allows us to adapt and optimise our training efforts to reflect the ever-changing threat environment that our customers face in reality,” said Paul Armstrong, CEO of Draken Europe.

“JSAS enables the warfighter to train and improve joint tactics, techniques and procedures in a secure environment against a peer adversary threat, unlike anything that has been seen in the past,” added Heather Robertson, VP/GM Integrated Solutions for Collins Aerospace. 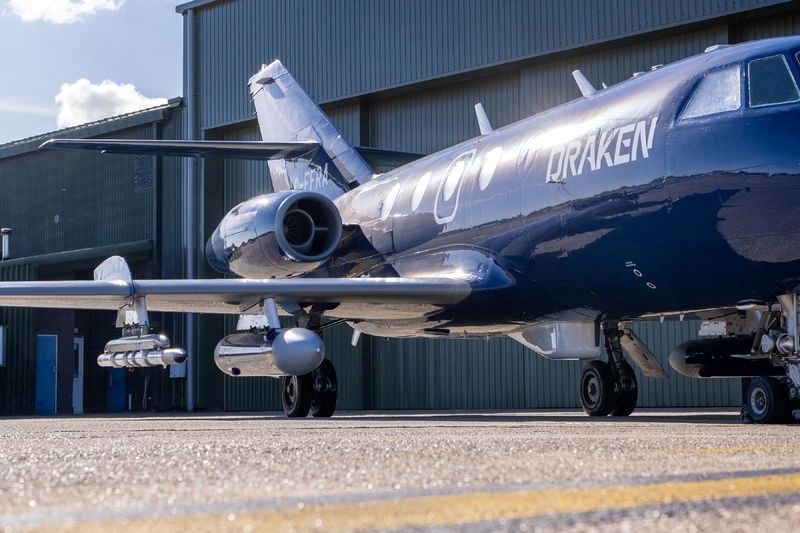 Trials will be under way for the pods, mounted on the FALCON 20 fleet, before year-end. (Photo: Collins Aerospace)