Japan is aiming to bolster its space defence capabilities by setting up a second space operations unit from FY 2022, as neighbouring countries continue to invest in development of an array of anti-satellite (ASAT) weapon systems.

During a visit to the Japan Air Self-Defense Force’s (JASDF) Hofu Kita Air Base on 14 November, Defence Minister Nobuo Kishi confirmed that the ‘Second Space Operations Squadron’ will be established at that base, initially with 20 personnel. The intention to create an additional space squadron was first revealed in the MoD’s FY2022 budget request, released on 31 August.

The unit will operate a locally-developed radar system, designed to monitor threats posed to Japanese satellites by electromagnetic interference, said Kishi, adding the country also plans to start operating a space situational awareness (SSA) system from FY 2023 and deploy an SSA-related satellite by FY 2026. “We will continue to actively strengthen our capabilities in the space domain to complete the defence of Japan,” he noted, while emphasising the importance of securing a “stable use of outer space”.

The JASDF’s ‘First Space Operations Squadron, established last year, which is based at Fuchu Air Base in western Tokyo and was formally launched May 2020, is tasked with operating a space surveillance system that includes a network of ground radars designed to track space debris and satellites to avoid collisions in space. Co-ordinating the tasks of these and other space-related bodies will be a new unit – the ‘Space Operations Group’ – to be established by March 2022.

In the ‘Defense of Japan 2021’ white paper in July, the MoD  revealed it also wants to be capable of disrupting the C4I capabilities of opponents through use of the electromagnetic spectrum. As part of efforts to establish a multi-domain force, Tokyo has increased funding for projects aimed at enhancing the country’s capabilities in space, cyberspace, and EW, particularly amid concerns that Japan faces an “increasingly severe security environment”.

Kishi’s announcement comes as China and Russia are advancing development of ASAT weapons, including jammers that interfere with satellites, and ballistic missiles that can directly destroy them.

In fact, on the day following Kishi’s statements, Russia conducted a direct-ascent ASAT missile test against one of its own satellites. The US State Department said that the move generated “over fifteen hundred pieces of trackable orbital debris and will likely generate hundreds of thousands of pieces of smaller orbital debris”. 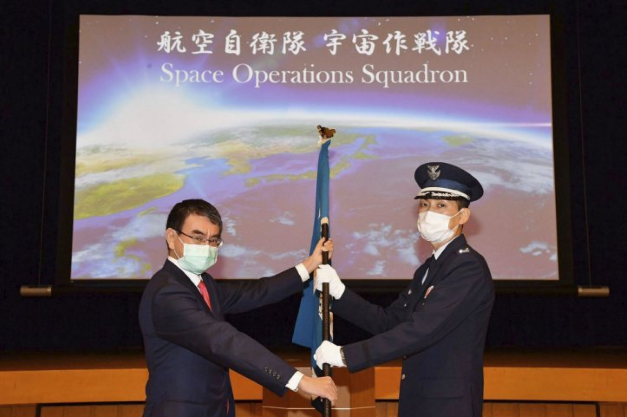 Japan’s first Space Operations Squadron was established in May last year and will be joined by a second unit in FY2022. (Photo: Japanese MoD)