Short on manpower and money, air combat commands are turning to more sophisticated simulation systems and ‘have-fighter-will-travel’ contractor adversaries. In the future, pilots may even fly with (or against) artificially intelligent wingmen.

US combat aviation commands claim they are short on manpower and money, and the US Marine Corps (USMC) may even take the summer off. “If I don’t get more money, I’ll stop flying in July or August,” said Lt.Gen. Jon Davis, Deputy Commandant for USMC Aviation.

If lawmakers pass another temporary spending measure, leaving funding flat, the Marines could run out of money for flight hours, and commanders would have to choose which squadrons could continue flying, he explained. “If we had to do it, we’d propose that the operational forward-deployers would keep flying and the guys in the back of the bench wouldn’t.”

That just exacerbates the readiness problem: “They’re flying safe airplanes; they personally are safe; but their proficiency and experience at dealing with things that go wrong is not where it needs to be,” Davis noted.

As it is, USMC F/A18 pilots only fly an average of nine out of 16 planned hours per month, which Davis believes will have a negative impact when today’s pilots become tomorrow’s squadron commanders.

The US Air Force (USAF) has a different dilemma – not enough pilots. USAF Deputy Chief of Staff for Manpower and Personnel Services, Lt.Gen. Gina Gross, told Congress the active and reserve components are short 1,555 pilots, including 1,211 fighter pilots. “Being ‘always there’ comes at a cost to equipment, infrastructure and most importantly, our airmen,” she said. “And we are now at a decision point: sustained global commitments and recent funding cuts affect capacity and capability for a full-spectrum fight against a near-peer adversary.”

The USAF is offering veteran pilots as much as $35,000 per year to re-enlist; a 13-year contract extension could mean up to $455,000 total. Compared with the $11 million it costs to train a fifth-generation fighter pilot, the bonus seems a bargain. Lt.Gen. Mark Brilakis, in charge of Manpower and Reserve Affairs, wants to offer a bonus for selected USMC F35, F/A18, and V22 pilots to ‘re-up’ as well. “F35 and V22 are currently growing. We don’t want be to caught short in those aviation communities.”

The USAF is expected to invite bids this summer for a multi-award contract in early 2019 of 36,000 hours of commercial adversary support at 12 bases. Nellis Air Force Base, Nevada, USA, will account for nearly one-third of the hours. The USAF evaluated commercial ‘red air’ via a one-year deal last year with Draken International, in which the contractor’s A4 SKYHAWKs flew sorties in support of the USAF Weapons School and the F35 Joint Operational Test Team.

Draken and flight simulator/training services company CAE are teamed in pursuit of Canada’s $1.5-billion, 10-year Contracted Airborne Training Services (CATS) procurement, which has been delayed, possibly until October, because government procurement specialists are reportedly busy with other priorities and don’t have the resources to review information from the bids.

“There is a growing market for third-party adversary training, and we believe the integration of virtual and constructive capabilities will be critical to providing realistic and high-quality training for pilots flying fifth-generation fighters. The combination of Draken’s fighter aircraft with CAE’s virtual and constructive simulation technologies will create an integrated and immersive red air training capability,” Chuck Morant, CAE Defence & Security Vice President of Global Strategy and Business Development, told MONS.

CAE recently received a contract modification for the NATO Flying Training in Canada (NFTC) programme in Cold Lake and Moose Jaw, extending through at least 2023. CAE will also add new capabilities and perform a range of upgrades and updates to the overall NFTC training system, which combines basic, advanced, and lead-in fighter training.

Discovery has joined forces with Inzpire to bid the UK ASDOT programme. The latter provides an independent exercise management team to the RAF’s Air Battlespace Training Centre and large-scale live training exercises expertise to the RAF’s Air Warfare Centre. CAE and Draken are teamed with Babcock International. A third bidder is comprised of Thales, QinetiQ, and Textron.

Textron entered the live flight-training market last year with its acquisition of Airborne Tactical Advantage Company (ATAC), which has supported military flight training since the late 1990s. “Countries around the world have been busy for a couple of decades deploying forces and consuming airplanes at a rate at which had not been planned. We have to do something to help save those precious flight hours,” Russ Bartlett, President and CEO of Textron Airborne Solutions, observed.

The USAF Research Laboratory (AFRL) at Wright-Patterson AFB, Ohio, is also seeking to make the “virtual aggressors” in training exercises more realistic. Today, for example, an F16 which is supposed to represent a red-force MiG will show up on the radar of a blue-force F15 as, oops, an F16 … and shooting American-brand weapons. But in the future, using a programme in development called SLATE (Secure Live, Virtual and Constructive Advanced Training Environment), the F16 will look like a MiG29, or whatever adversary aircraft is dialed into the battle, on all sensors and displays. “When we take off, go around the area and point at each other, I have the radar cross-section signature of a MiG29, I have all of the radar emissions of a MiG29, so when I lock him up, he doesn’t see on his radar warning receiver a symbol for an F16. He sees a MiG29,” Dave ‘Moses’ Noah, SLATE programme manager, explained.

Of course, once the F16 and F15 are in visual range, the illusion disappears. Maj.Gen. Robert McMurry, AFRL Commander, explains. “We’ve learned over the past that our training systems are not up to the task that we have. The cost of bringing live training environments and exercise environments to the level of fidelity that we really need to simulate what we would expect to be a conflict environment is probably cost prohibitive.”

The first SLATE demos with live USAF F15Es and USN F/A18s interfacing with virtual and constructive players are planned for next March. An event scheduled for October 2018 will feature 16 live blue-force aircraft, additional live red-force aggressors, and a myriad of virtual and constructive forces. However, McMurry said the technology won’t be ready for the F-35 until the mid-2020s. The USAF and USN have committed about $70 million thus far.

A key technology for SLATE is a radio waveform that can manage the huge amounts of encrypted data throughput between the LVC players, including a multi-level security system that allows different data to be passed to partner nations, depending on classification level. The Massachusetts Institute of Technology (MIT) Lincoln Laboratory has the lead on what is termed the Fifth-Generation Advanced Training Waveform (5GATW).

Cubic Global Defense is creating a smartphone-sized radio capable of processing the 5GATW, encryption and security architecture, and a ground support system to connect the LVC elements. “We’re at the point where we can do simulated connectivity of the system, so we can test out and verify the communications. The encryption system is already under the National Security Administration (NSA) process for certification,” Mike Knowles, Cubic’s Vice President of Air Ranges, told MONS.

The exercises were likely a “first day of war” scenario against heavily defended targets. The JSFs entered “denied airspace” to engage aerial and ground targets, both with munitions they carried and weapons launched from B-1B bombers loitering outside the threat environment. Similarly, in a mid-2016 exercise at Hill AFB, Utah, F-35s suffered “zero losses” in eight dogfights against fourth-generation F-15E STRIKE EAGLEs and “a 94%  hit rate with 15 of 16 bombs on target.”

The year previous, in a close air combat role in a 14-day Green Flag exercise at the National Training Center, Fort Irwin, CA, “not a single F-35 was ‘shot down,’” though A-10s and F-16s were defeated in similar conditions.

But how might the JSF and other current manned fighter aircraft fare against unmanned aircraft endowed with artificial intelligence? Not well, based on initial experiments at AFRL. Indeed, after some tweaking by a retired adversary tactics instructor, a group of intelligent drones known as “Alpha” annihilated the blue forces without taking a single loss.

Developed with University of Cincinnati aerospace engineering researchers and an Ohio small business, Psibernetix, Alpha uses “fuzzy logic,” which might seem an oxymoron until you consider the drone is constantly processing over 150 inputs such as positions, velocities, and accelerations for itself, its squadron mates, and the opposing forces, as well as estimated missile range data, platform visibilities, and shots taken. A key factor is the processing speed of AI – can the drone calculate faster than the average human visual time of 0.15-0.30 seconds (and an unknown longer time to make decisions about manoeuvres and firing options). If an AI-controlled unmanned aircraft could handle the extreme high-G performance requirements and complex computations, the result could be “an intelligent and unrestricted hostile force.”

Col. Gene Lee (Ret.) called Alpha, “the most aggressive, responsive, dynamic and credible AI,” he has seen to date. Col. Lee is a Fighter Weapons School graduate, former USAF battle manager, and aggressor instructor who has flown in or controlled thousands of air-to-air intercepts in multiple fighter aircraft. After the first generation of the Alpha AI drone had merely, “held its own,” against blue forces with heavy losses on both red and blue sides, “Geno” worked with Psibernetix to refine tactics, techniques and procedures. In the revised model, the result was, “blue’s total defeat with no or minimal losses by red Alpha.” In fact, when Col. Lee attempted to fly a virtual blue aircraft against the monster he’d helped create, he was shot out of the air by the reds every time.

The USAF foresees the possibility of pairing a manned fighter aircraft with an unmanned AI “wingman” (presumably with the call sign ‘Fuzz’) for a, “revolutionary leap in capability of airpower in the near future,” researchers said. “The speeds at which Alpha can intelligently operate serve as a distinct advantage within the context of air-to-air combat. Alpha-controlled aircraft would happily volunteer to take risky tactics and have the manned craft perform safer support roles.” 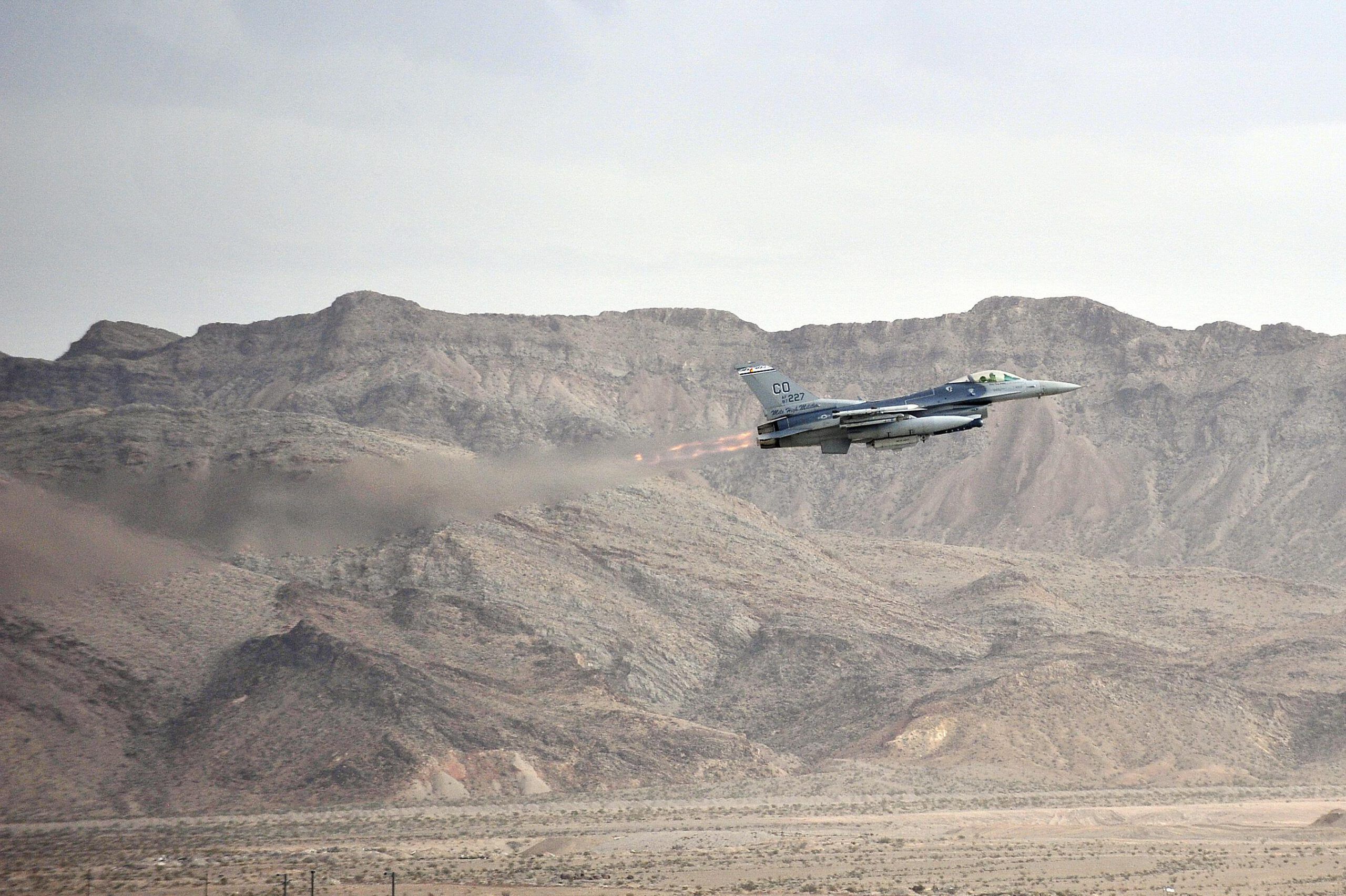