OCCAR has contracted a Fincantieri-led consortium to build it a second logistic support ship (LSS) for the Italian Navy, the company announced on 20 December, confirming the existence of an option for a third vessel.

The vessel, valued at some €410 million, including the combat system, will be built entirely at the Castellammare di Stabia shipyard, with delivery scheduled for 2025. The order also includes provision of support over the lifecycle of the vessel in the first ten years, divided into logistics and in-service support (maintenance), as well as supply of naval components and machinery produced by Fincantieri Mechanical Systems and Components Unit, including shaft lines, steering system, manoeuvring thrusters, fin stabilisers and other handling systems.

Fincantieri is already building seven multi-role OPVs (PPA) and the Trieste landing helicopter dock (LHD) vessel for the Italian Navy, and last March handed over the Vulcano LSS. The latter design, of which the newly-contracted ship will be the second-of-class, has also been acquired by the French Navy for its Flotlog programme. The basic characteristic common to all three classes of ship is a very high level of innovation, which makes them extremely flexible and highly efficient in their operational profiles. Most importantly, the navy will be able to use them in a complementary manner, even for non-military tasks such as humanitarian assistance and disaster relief. Moreover, their environmental impact is low, thanks to advanced low emission generators, electric-drive propulsion motors and biological waste control systems.

The 293m vessel can carry a two operating theatre 800m2 hospital, provide an operational base for two helicopters and two RHIBs, conduct rescue operations at sea and transport significant volumes of dry and liquid supplies. With a complement of 235 and a top speed of approximately 20kts, the vessel can embark complex defensive systems and acta as an intelligence or EW platform at need. 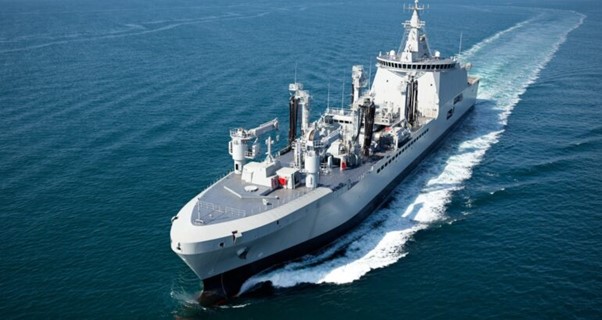 The Italian Navy will receive a second Vulcano class LSS in about four years and has an option on a third vessel. (Photo: Fincantieri)