DS Raider, developers of the EZRaider personal transport, sometimes dubbed a ‘military scooter,’ has further developed the vehicle so that it can be operated by a single soldier and is also able to conduct missions autonomously, using a sophisticated LIDAR-based guidance system. Demonstrators of this unique mode of transport are currently being evaluated.

Company CEO Miki Bar told MON last month that all the company’s systems are to be capable of undertaking autonomous operations. Pointing to the EZRaider HD4 – the heaviest and most capable variant – he stated it has a unique ‘go anywhere’ capability, thereby acting as a force multiplier. “A mission can start with a soldier controlling the vehicle and then it can continue autonomously to perform an intelligence-gathering mission, or even carry a weapon systems that t is operated by remote control,” he explained. US and other armed forces are showing considerable interest in EZRaider and, after a series of successful tests, the US has procured a number of vehicles for a more complete operational evaluation.

The EZRaider HD4 is powered by four 1,200W electric motors, can carry one or two soldiers with full combat gear and can tow a special trailer – also electrically-powered – for additional equipment. The high-torque, precision response motors, powered by a 3,000W battery, give the vehicle an operational range up to 80 kilometres.

According to the Kfar Saba-based company, EZRaider HD 4 is 27in wide, weighs 209lbs and can be easily folded for transportation. Bar indicated that it can carry a payload up to 370lbs – which is increased by an additional 550lbs when using the associated trailer. A specialized suspension system gives each of the four wheels independent movement in both vertical and horizontal axes, which “allows the vehicle to cope with rough terrain,” he explained. That terrain capability is further enhanced by the 20in freeboard the soldier stands on.

The EZRaider features an intuitive driving control system. “The soldier uses body movements like the ones skiers or water gliders use to control the movement,” Bar stated, adding that as far as thermal signature management is concerned, “the electric motor emits something like 122°F, and that can be lowered with simple heat shielding materials.” 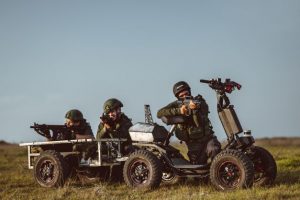 When used in combination with its associated powered trailer, the EZRaider’s payload capacity is up to an impressive 920 pounds. (Photo: Benny Doutsh) 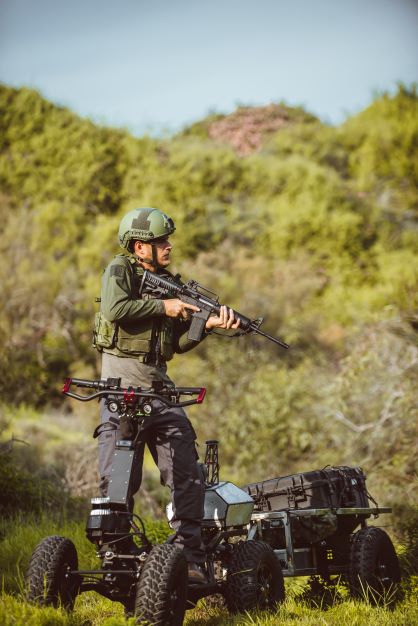 The EZRaider can be used and controlled by a single soldier or used to conduct autonomously-controlled missions. (Photo: Benny Doutsh)