Israel needs to adapt its multi-layered defence system to cater for the possible use of hypersonic missiles by Iran.

Russia has also demonstrated proficiency in the development of missiles capable of reaching speeds of Mach 10 or more, making effective defence against them much more difficult. In fact, a Russian air force MiG-31 recently landed at a Russian-controlled airbase in Syria carrying a Kh-47M2 KINZHAL missile, an air-launched hypersonic weapon with a 2,000km range. Reports that the missile has been test-fired over the Mediterranean persist, but remain unconfirmed as yet. Israeli sources suggest that Moscow’s objective in bringing the missile into the theatre amounts to a “power demonstration” to all parties engaged in Syria – notably Israel and the US.

Israel has an operational, multi-layered air defence system that is being continuously upgraded, but even the ARROW-4 interceptor, currently under development to meet the advanced ballistic missile threat, is deemed to be ineffective against hypersonic weapons. So the nation lacks an effective defence against an evolving threat, although local sources have stated to MON that “different ideas are being studied now.” 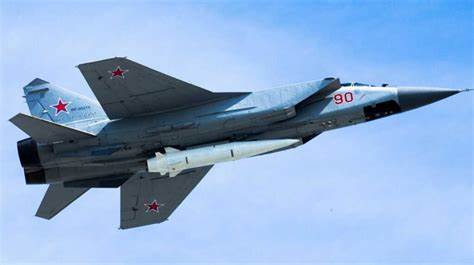 Hypersonic missiles such as the KINZHAL – and potential development of similar weapons by Iran – pose problems for Israeli defence that currently lack effective solutions. (Photo via Wikipedia Commons)