Reeling in surprise, the Israeli defence establishment is trying to understand how the combat-proven IRON DOME air defence system lost a US Army competition to a system still under development by Dynetics and Raytheon Technologies.

The surprise announcement a week ago came only a short time after two IRON DOME batteries – procured by the US Army to fulfil an urgent requirement – proved their capabilities in a vigorous testing programme. In recent operations in Gaza against Hamas – in which 4,000 rockets were launched at Israel – IRON DOME has achieved a 98% interception rate.

Raytheon is a contractor for both IRON DOME and the Dynetics ENDURING SHIELD  project, the difference being it acts as prime contractor for IRON DOME in the US but is a sub-contractor to the Dynetics programme. Nonetheless, Israeli eyebrows have been raised. While the reasons for the decision have not yet been made clear, a senior Israeli source told MON that speculation suggests some causes, both of which are “very worrying.”

Some indications are that since the advent of the Biden administration, the US armed forces may be more diligently avoiding the “not invented here” cachet adhering to foreign-sourced equipment. More important, however, is the fact that, despite Raytheon’s close partnership with Rafael, sales of IRON DOME to third parties require Israeli approval. “The Americans feel the growing competition in the international defence market and want systems that they can export without asking approval from another country,” the source suggested.

Highlighting the strong influence of the US defence industry lobby, an Israeli defence industry source suggested to MON “if you look at the history, the Americans that are assisting Israel in the financing of the Israeli developed ARROW ballistic missile interceptor have not purchased the system. And, in spite of the fact that Israel [has] developed some of the most advanced UAVs, the Americans have not purchased any of the new very advanced ones,” adding that this most recent selection shows “a big red light” that will potentially change some of the rules governing Israeli defence exports. “These rules are [currently] very strict, but this market is changing, with China and Turkey offering UAVs to everyone with a credit card.”

This situation has been discussed recently within the Israeli MoD, but no real changes in export policy have been made and, according to sources, are not expected.

Officially, Rafael and the MoD declined to comment on the “surprising” US Army decision: MON understands Rafael is trying to reverse the decision but, to be frank, that seems to be a lost cause.

[An additional factor that reinforces the belief that the selection of ENDURING SHIELD may have been made on criteria other than technical or value for money lies in the fact that the Dynetics solution makes use of the relatively expensive SIDEWINDER AIM-9X missile, costing between $500-550,000 per round, whereas MON understands the unit cost of the TAMIR interceptor used in the IRON DOME system to be around $180-200,000. – Editor] 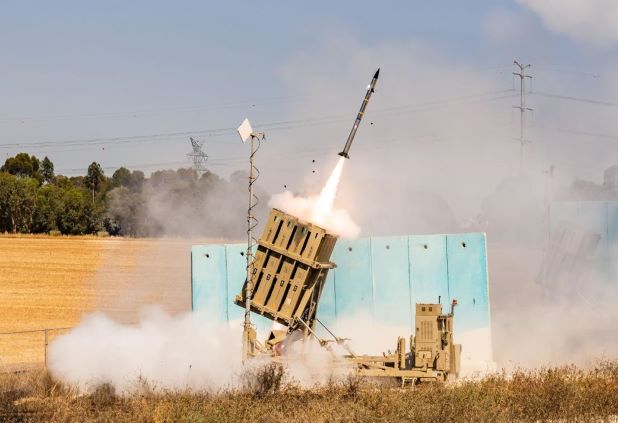 IRON DOME achieved an intercept rate of 98% during recent operations against Hamas-launched rockets in Gaza. (Photo via author)