Houthi rebels engaged in Yemen have recently received Iranian-made armed UAS with longer range and larger, more powerful warheads. Some of these can be operated in swarms, according to reports from the region.

Israeli sources contend that the Iranians have stepped up their efforts to enhance this offensive capability, and is actively exporting it to Tehran’s proxies, principally the Houthis in Yemen and Hezbollah in Lebanon. They also state that the Houthis have a significant arsenal of armed UAS.

In the past, the Houthis have used SAMAD UAS for long-range attacks – in 2018 in Abu Dhabi and again in 2019 in Riyadh. The SAMAD-3, for which an operational range of 1,800km is claimed – theoretically sufficient to conduct an attack on Israel – has limited capacity for damage to Israeli infrastructure, given its 45kg warhead. However, in March, the Houthis unveiled the SAMAD-4, claiming a range of 2,000km and the ability to deliver two small rockets. At the same time, they also showed the WA’ID UAS, which appears to be a loitering munition with a declared 2,500km range. “These latest developments indicate a potential leap forward in the Houthi arsenal of weapons capable of striking Israel,” MON has been informed.

While the Houthis have not yet used their armed UAS to attack Israel, they have conducted attacks on Israeli-owned cargo vessels – the last one claiming the lives of two crew members. Updated intelligence indicates that Iran is operating a dedicated production line for the manufacture of a range of armed UAS.

The threat is considered a high level one, as the assessment is that the armed platforms can be operated in swarms, making interception vastly more complicated. 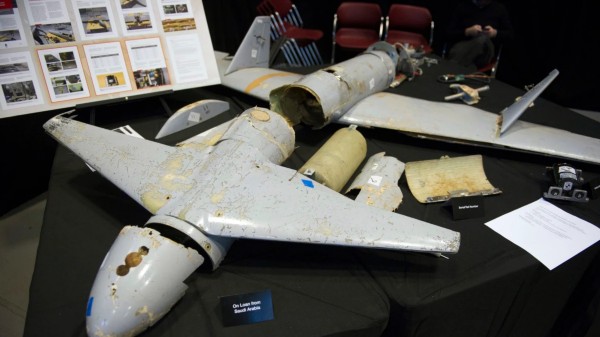 Iranian-made UAS have been used in attacks on Abu Dhabi and Riyadh and are now being used by Houthi rebels in Yemen, according to persistent reports from the region. (Photo: Conflict Armament Research)