In recent years, Turkish Bayraktar TB2 unmanned combat aerial vehicles (UCAV) have operated in multiple theatres, with the most recent successful application being observed in the Second Nagorno-Karabakh war, waged between Azerbaijan and Armenia. The drones have proven themselves an efficient weapon against Russian-made equipment, and played an important role in the Azeri victory over Armenian troops.

However, to date, they have never been exported to NATO countries, despite Turkey being a member of the alliance. A recent breakthrough changes that. On 24 May, Poland became the first NATO member-state to buy the TB2 UCAV. A contract worth $270 million (€222 million) for 24 armed drones was signed by Polish Defence Minister Mariusz Błaszczak in the presence of President Andrzej Duda during his official visit to Turkey.

It seems that the acquisition of the Turkish drones by Poland also sparked increased interest in Latvia, whose Defence Minister, Artis Pabriks, paid a visit on 7 June to Baykar Defence, the Turkish private defence manufacturer specialised in UAVs, C4I and artificial intelligence, where he examined the Turkish-built drones and other military equipment.

A meeting with Turkish Minister of Defence, Hulusi Akar, also took place, in which the mutual interest in expanding security and defence industry cooperation was noted. During the meeting, the parties signed an MoU aimed at improving the bilateral ties, with Latvia sending a Defence Attaché to Ankara.

After the annexation of Crimea by Russia in 2014 and Moscow’s hostile activities in the region, NATO’s Eastern Flank countries have increased their defence expenditures, worrying about their national defence capabilities and fearing the Russian threat. All the Baltic states and Poland spend more than 2% of GDP on defence, according to the NATO criterion.

It is worthy of note that Ukraine, the EU and NATO’s immediate neighbour, has already secured an agreement with Turkey to set up a joint venture for the production of Bayraktar TB2 drones on Ukrainian soil, with an initial production of 48 UCAVs. Currently, besides Turkey, only Azerbaijan, Ukraine and Qatar operate the TB2. 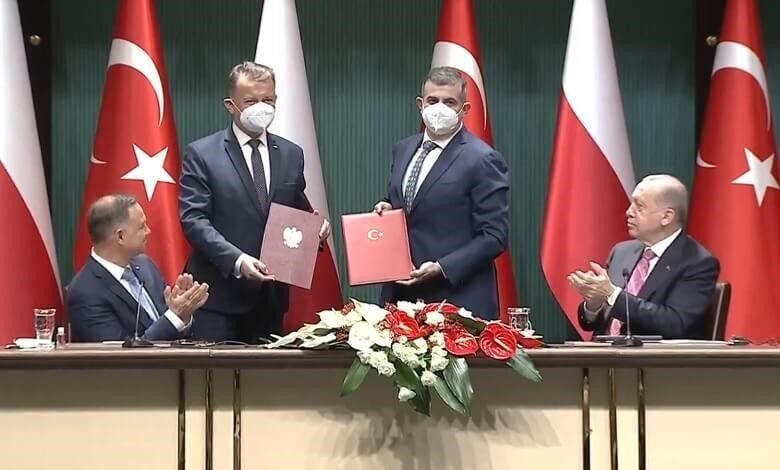 Polish Minister of Defence, Mariusz Błaszczak, and General Manager of Baykar, Haluk Bayraktar, sign the agreement in the presence of the Presidents of Poland and Turkey. (Photo: Baykar)