Indra has released a new version of its proven VICTRIX simulator, providing trainees with an immersive experience of urban warfare for skills development and mission planning and rehearsal.

The new VICTRIX VR combines the use of 3D rendering and optical positioning technologies that can locate and track objects with millimeter precision and low latency. Trainees wear the sensors, so that the simulator detects their position and replicates virtually all movements, allowing for repeatable training serials. Participating units can analyse threats, examine tactical options and anticipate adversarial responses. “The system is the closest thing to real training, achieving a degree of realism similar to a laser duel but with the benefits of being able to introduce all kinds of synthetic elements, such as tanks and helicopters, and configuring other parameters, such as the city in which the action takes place, the number of adversaries, the means at their disposal, the degree of resistance they offer, the time of day, the visibility and so on,” a spokesman pointed out.

This is next-generation training, designed to train soldiers facing increasingly complex missions involving hybrid warfare techniques, for example. In many cases, they may face an advanced adversary who has also been extensively trained in use of the latest technologies. VICTRIX VR measures the performance of each soldier – instructors can review each movement to remedy errors at individual and/or collective levels. “Preparing the soldiers of the future requires measuring their skills on an ongoing basis. No factor can be left to chance,” the company stresses.

The initial version of VICTRIX is currently installed at over 40 Spanish military bases and feedback has enabled Indra to develop a much more advanced solution, one with a technological maturity far superior to that of any other system currently available. The new VICTRIX constitutes a huge technological leap compared to the first version, moving from the projection of a scenario onto a screen to the generation of a virtual scenario in which trainees can move around freely. 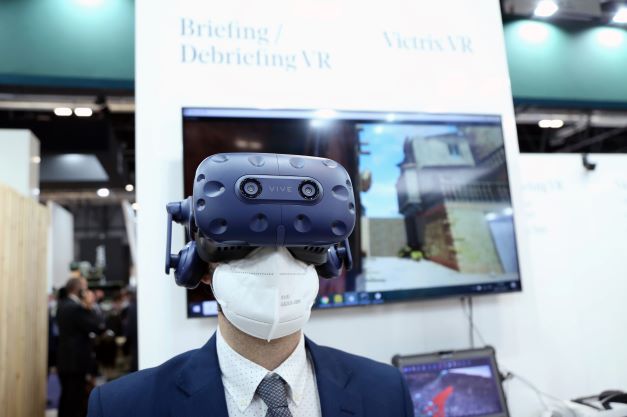