Indra and Thales have completed development of a new release of a battlefield management system (BMS) that provides the Spanish Army with the most advanced and effective tactical C2 solution currently available, the companies announced on 30 July.

A series of sophisticated exercises recently conducted by the 6th ‘Almogávares’ Paratrooper Brigade recently tested and validated the new release. This new version provides unique capabilities to operate in demanding bandwidths such as those usually available for tactical communications. This ensures that the system works effectively in complex scenarios, in which communications are difficult and hostile forces are constantly trying to disrupt them. The system has the capacity to exchange not only text messages and images, but also direct video in real time.

The BMS also integrates perfectly with NATO standards, which makes it interoperable with other allied countries’ systems. It also enables operational commanders to make changes to the order of battle on the spot, reacting instantly to unforeseen events.

The BMS is also integrated with the Spanish Army’s logistics management system (SIGLE), to streamline and automate inventory management, and with other Army systems through the standard IDT interface for exchange of tactical data.

During the exercises, the SYNAPS radio was also tested. This high capacity tactical radio, with ESSOR SCA architecture, is a bi-band (VHF/UHF) and bi-channel radio, specifically designed for collaborative combat and continuity of the chain of command. SYNAPS capabilities ensure interoperability with the current PR4G combat radios and will enable the service to scale new functional features and services into the BMS-ET in the future, preserving communications security, integrity, confidentiality and resilience. At the same time, it offers Brigade 2035 the possibility of reducing its logistics footprint, using a single radio station, instead of three, to communicate with upper and lower echelons via a single VHF channel and simultaneously benefiting from the high bandwidth performance provided by the UHF channel. At the Command Post, integrated into the BMS-ET, a real-time video was shown transmitted by an observation unit located more than 10km away.

Earlier versions of the BMS have already supported overseas missions for the Army, providing excellent results in facilitating coordination and interoperability with the rest of the allied forces. The increasing digitalisation of the battlefield has made data a decisive factor for any army to prevail over its adversaries. The Spanish Army has been working with Indra and Thales on this advanced system for years; an experience that has helped to positioned it at the forefront of European C2 technologies. 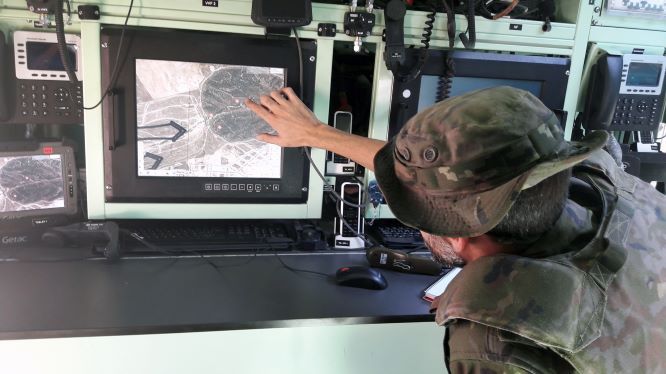