Indonesia’s President, Joko Widodo, has launched a new state-owned holding company for the defence sector, in an effort to help reduce dependence on foreign-made platforms and weapon systems, the government stated on 20 April.

“We must realise the independence of the defence industry together, we cannot do it separately. We have to strengthen the industry, [and] we also have to build the ecosystem, so that it grows and develops further,” said Widodo during the launch ceremony, describing the holding company as a “long-awaited project,” designed to consolidate the country’s defence industries.

To achieve this, the president called for “a gradual increase in the level of local content of defence products from 41% as of today to finally reach 100%.” He said the country must be “swift, agile, and sharp to seek opportunities, as well as proactive in grasping these opportunities so that we can be a part of global supply chain.” He emphasised the need for Indonesia to develop a strong, modern defence industry that not only meets national demand but is also increasingly competitive on the international market. This, he said, must be achieved by being innovative, mastering component manufacturing, and building global partnerships that enable technology transfers.

Defence Minister Prabowo Subianto said during the event that he hopes DEFEND ID “can be a solution to accelerate the independence of the Indonesian defence industry to meet [our] domestic defence equipment needs, in terms of human resources and the quantity as well as the quality of technology.”

Marking the launch, a number of co-operation agreements were signed between the DEFEND ID members, the Indonesian MoD, and two foreign companies. These included contracts between the MoD and PT LEN for 13 ground control intercept radars and support equipment; PT Dirgantara Indonesia signed a deal with the ministry to modernise 12 C-130 aircraft; while PT PAL reached an agreement to modernise and provide MRO services for 41 Indonesian Navy warships.

In addition, PT Pindad secured a deal for production of small calibre ammunition, while PT Len and Thales signed a strategic partnership agreement for further collaboration on a wide array of defence-related topics, including radars, satellites, EW, UAVs and combat management systems. For radars, the collaboration will include the planned transfer of technology for military and civilian systems, including local MRO activities, and co-development of a national C2 radar. Finally, PT Pindad and Turkish company FNSS signed a global strategic partnership agreement on the joint production of Armoured Amphibious Assault Vehicles.

Indonesia has outlined an ambitious military modernisation plan through to the mid-2040s that requires the country to focus more resources on strengthening its overall defence capabilities. 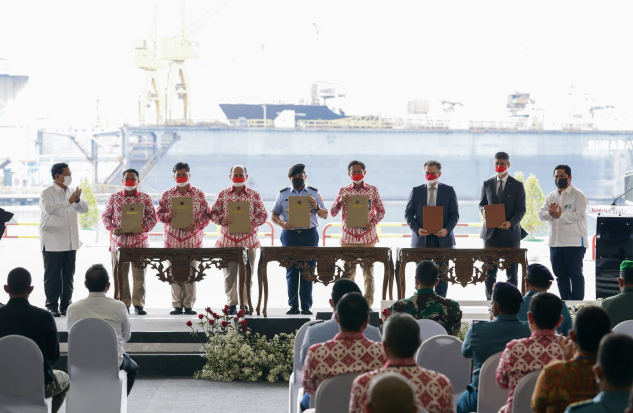