Schiebel Australia is preparing for a contract award to supply the Royal Australian Navy (RAN) with a modified variant of its Camcopter S-100.

Speaking at the Indo-Pacific 2022 exhibition in Sydney, Fabian Knechtl, Managing Director told MON that, with partner Raytheon Australia, Schiebel will spend the next few weeks finalising its bid and deciding some of the sensor packages. This includes the IFF responder certification, Link-16 integration, new radar sensor and ITAR controls. This follows the decision by the Australian government to move to a single source supply of the VTOL UAS, and end its SEA 129 Phase 5 Maritime UAS project (MUAS).

Schiebel is already providing three S-100 UAS to the RAN’s experimental 822X Squadron under the NMP1942 project, These were being used as a testing platform to inform development of requirements for MUAS, which had a Request for Tender due in 2022.

Knechtl said that the move to cancel SEA 129 Ph5 “came out of the blue,” as the teams bidding for the project had expected delays, due to the Australian general election taking place in May, that would see a schedule slip overall in the programme. Instead, he said, because of the degrading geopolitical situation with China, the RAN decided to bring UAS capability forward, and briefed the Minister of Defence accordingly last year.

He expects the NMP1942 project to “ramp up” with the acquisition of more S-100 and for 822X Squadron to “lose the X,” moving from an experimental unit to an operational one by the end of the year. The squadron is expected to receive a second batch of three S-100s to increase capability to two flights.

The contract with Schiebel is expected in early 2023, for between 20-40 S-100 systems that will be an Australian customised variant, including governmental compliant payloads. The final numbers of UAS needed will depend on desired rate of effect and sustainment schedule the RAN wants for the capability bricks of its UAS systems. This decision will enable their deployment from the 12 Arafura-class Offshore Patrol Vessels and the first 3-4 Block 1 Hunter-class frigates.

Knechtl said that the company will build on its existing infrastructure in-country, and expand on the industrial footprint that it first established in 2016, when it secured the NMP1942 contract. 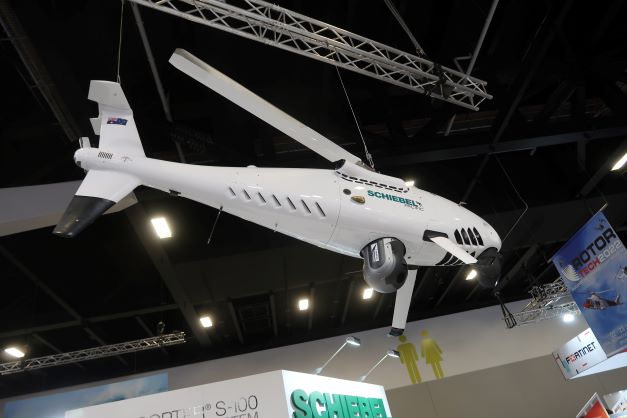