The Royal Australian Navy (RAN) is about to start trials of an uncrewed Armidale-class patrol boat to test the concept of operating larger autonomous surface vessels.

Speaking at the Indo-Pacific 2022 exhibition in Sydney, Tim Speer, Market Development Manager at Australian shipbuilder Austal, told MON that the recently-decommissioned HMAS Maitland was being ‘de-militarised’ in Darwin. As part of the R&D project, the company will take ownership of the ship and is expected to re-launch it at the end of May, when a crew will bring the vessel to Austal’s facility in Henderson, Western Australia to be modified to support autonomous trials.

Shipyard trials will take place by the end of the year, before autonomy demonstration trials, due to start in early 2023. “The intent is to initially work through a remote-controlled trial by taking the boat to sea and controlling it from the shore, followed by a short autonomous trial in the Henderson area,” Speer explained. “A third trial will be to take the boat to sea for 14 days to demonstrate the vessel can operate at long-range over-the-horizon.”

The goal is to gain a better understanding of the certification approach for autonomous operations, as this is the largest vessel trialled with autonomous systems to have been attempted outside the US.

Maitland will be fitted with additional sensors for situational awareness, to monitor the immediate area around the vessel, and an autonomous control system from L3Harris, which is partnered with Austal. It will also receive an augmented MARINELINK integrated monitoring, alarm and control system and communications equipment to support the remote-control element of the trials. Controls will initially be line-of-sight, but SATCOMs will be utilised for the longer-range trials.

Funding for the trials is being provided through DoD’s Trusted Autonomous Systems Defence Cooperative Research Centre (TASDCRC) for the RAN Warfare Innovation Navy (WIN) Branch, with other funds provided by Austal. The trials are due for completion in February/March 2023, and Austal will provide the RAN with a report on the exercises in May.

Speer said that, although there are no plans yet as to how the RAN may proceed after the trials period, “there is interest in putting other capabilities on board and use it as a test platform for other mission capabilities.”

Maitland could be fitted with a towed array sonar or a launch and recovery system for other autonomous assets – airborne, surface or underwater – entailing a range of additional work that could be undertaken but, at this stage, the R&D work is focussed on proof-of-concept. 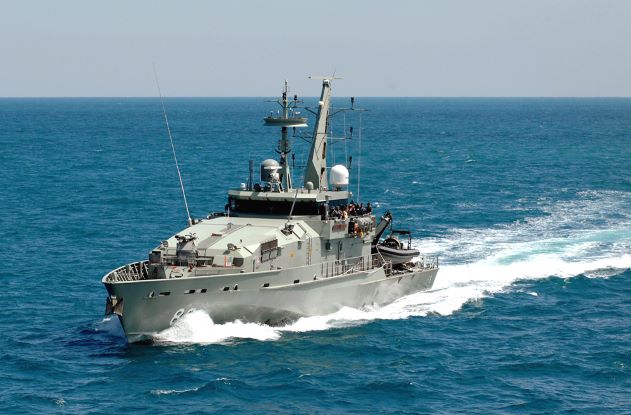 An Armidale-class patrol boat – still manned at this point. (via author)