A Request for Tender (RfT) for the Royal Australian Navy’s (RAN) Project SEA 1905 Phase 1 for an autonomous Maritime Mine Countermeasures Survey capability is expected by the end of May.

Both ECA Group and Saab Systems have been down-selected to compete for the programme, on which a decision is expected by the end of this year or early next. ECA is teamed with local company Total Marine Technology (TMT), while Saab has teamed with Leidos and SeeByte.

Speaking at the Indo-Pacific 2022 exhibition, Dominique Giannoni, CEO of ECA Group, told MON that the company intends to offer a fully integrated and autonomous third-generation stand-off MCM solution that includes underwater, surface and air vehicles. The solution can be deployed from shore, offshore patrol vessels like the RAN’s new Arafura-class ships or from dedicated mine warfare vessels if required.

Giannoni said the ECA system is already proven as “most of the systems have been sea-tested and some are in service with other navies”. But, he added, the key component is integration of all the unmanned assets, which it is doing under the joint Belgian-Dutch rMCM project, in partnership with Naval Group. Twelve OPVs are being built, and will be equipped with a toolbox of over 100 unmanned systems.

Giannoni explained that using its C2 system, operators can prepare the mission with the assistance of AI to establish when, where and how the MCM platforms will operate. The can then use the same system to conduct mission launch, from which point the unmanned systems is on its own. The C2 system will also process the data and take decisions to complete the mission, before moving on to the next phase or area. This technology will be brought into Australia.

Giannoni said that the ECA solution for SEA 1905 will be different, because it has to meet RAN requirements and also integrate the RAN’s existing S-100 VTOL UAS and the Remus AUV. He added that additional Australian companies will be introduced alongside TMT, to make the system more Australian over time. But in the first stage, because RAN requirements call for a non-developmental solution, the initial phase of the programme will introduce existing platforms.

The system will be in-service for up to 30 years, over which time additional Australian partners will be introduced to undertake software development, signal processing and other roles supporting the MCM capability.

Release of the RfT will provide a more detailed requirement set for the bidders to respond to and the final number of unmanned systems and extent of the capability will be defined. 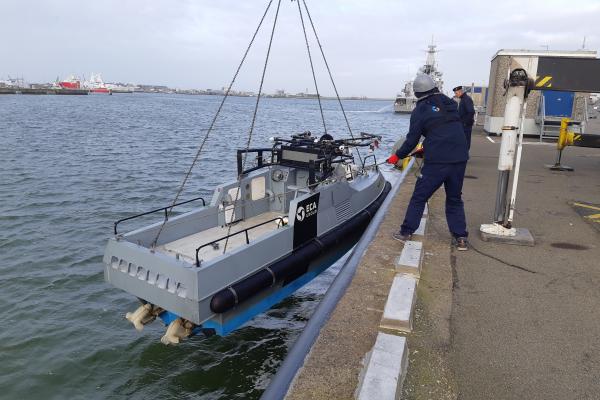 ECA’s bid for the programme will undoubtedly owe much to work currently being undertaken on the Belgian Dutch MCM programme. (ECA Group)