The three DOLPHIN-class boats, built by thyssenkrupp Marine Systems GmbH (tkms) are advanced DOLPHIN 2-class vessels, equipped with air independent propulsion (AIP) systems, liberating them from any requirement for external air, meaning they are able to remain submerged for far longer periods. According to German magazine Der Spiegel , the DOLPHIN 2 can remain underwater for up to eighteen days, and other foreign media reports indicate that at least one Israeli submarine is on station in the Persian Gulf.

The new boats are 12m longer and displace 500t more than the DOLPHIN 1 submarine. Weighing in at some 20% heavier, the boats can reach speeds of 25kts while submerged and can operate in depths up to 1,150 feet. The 35-man crew can be supplemented with up to 15 additional passengers – and they also feature dedicated diver lockout chambers.

As far as weapon systems are concerned, six 21in torpedo tubes are supplemented by four 26in tubes. A very advanced sonar system, details of which remain classified, is being developed by Rafael subsidiary DSIT. Sources informed MON that it is based on the technology developed by DSIT for the SWORDFISH active/passive low frequency towed array system and will be capable of detecting threats “of types and at ranges” hitherto unachievable. The company states the system will be capable of underwater search, detection, tracking and classification in passive, active and parallel modes, explaining further that each sonar system includes machine learning technologies for automation of algorithms and reduction of operator workload.

The submarines will also be equipped with Rafael’s FloatLink system, enabling them to communicate with navy headquarters and other units afloat while submerged at depth and in silent running mode.  FloatLink is ejected from the submarine through a torpedo tube: once surfaced, a SATCOM antenna is unfolded, enabling two-way communications.

DOLPHIN 2 AIP boats will also carry Rafael’s SCUTTER, a self-propelled, third generation, reactive, expendable torpedo countermeasure system to protect them from simultaneous multiple passive and active acoustic homing torpedoes. SCUTTER employs a user-generated threat to select the appropriate response. It is launched immediately after a torpedo alert and, moving automatically to operating depth, it identifies the torpedo, then generates and transmits customised deception signals. The torpedo attacks and re attacks the SCUTTER until the torpedo’s end of run. SCUTTER then self-destructs at the end of its mission.

Two DOLPHIN 2- class submarines have already been delivered, with the third to be delivered at an as-yet unconfirmed date. 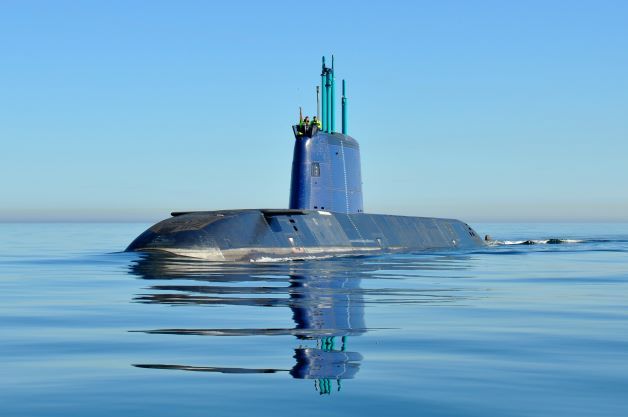 tkms has already delivered two DOLPHIN 2 AIP boats to Israel, where they are being fitted with indigenously-developed systems. (Photo: tkms)