India’s military is acquiring an increasing number of indigenous platforms, as part of New Delhi’s efforts to reduce materiel imports and bolster national defence industrial capabilities. In a recent example at the Bombay Engineer Group Centre in Pune on 12 April, the Indian Army inducted three new types of wheeled armoured vehicles into service.

Several examples of the 4×4 Quick Reaction Fighting Vehicle Medium (QRFV) and the 8×8 Infantry Protected Mobility Vehicle (IPMV) – both developed by Tata Advanced System Limited – and the Monocoque Hull Multi Role Mine Protected Armoured Vehicle (Kalyani M4) from Bharat Forge were handed over, according to the MoD.

The event was presided over by Chief of Army Staff, Gen Manoj Mukund Naravane, who also took delivery of Tata’s Ultra Long Range Observation System: a new day/night imaging system with a 25km range. He commented that these specialist vehicles and systems would “greatly enhance the operational capabilities of Indian Army in future conflicts.”

According to Tata, the IPMV was developed jointly with India’s Defence Research and Development Organisation (DRDO), and is based on the company’s Wheeled Armoured Platform – the country’s first locally-developed amphibious IFV. 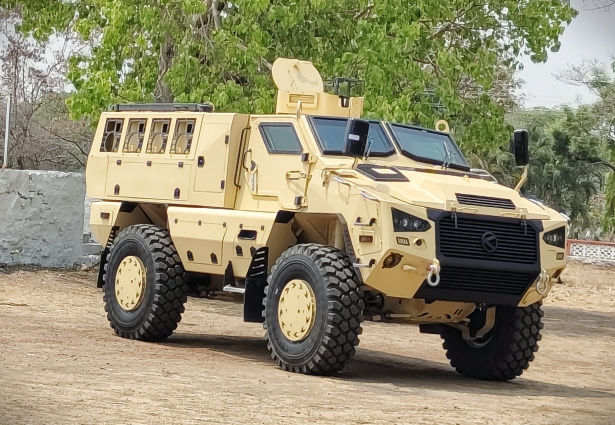