Development of Medium-Range Weapon Being Fast-Tracked

India’s Defence Research and Development Organisation (DRDO) tested a new conventionally armed, surface-to-surface missile designated Pralay on 22 and 23 December. The tests, which involved the missile being launched in two different configurations, “met all objectives,” according to the government’s Press Information Bureau (PIB).

Referring to the first test, the PIB noted that the new missile “followed the desired quasi-ballistic trajectory and reached the designated target with [a] high degree [of] accuracy, validating the control, guidance and mission algorithms”. The test conducted the following day saw the weapon being tested with a heavier payload and at a different range, “to prove the precision and lethality of the weapon”.

The PIB described the Pralay as featuring a solid-propellant rocket motor and featuring “many new technologies [such as a] state-of-the-art navigation system and integrated avionics”. It also asserted the weapon – expected to have a strike range of 150-500km – can be launched from a mobile launcher.

According to the MoD, development of the Pralay is being fast-tracked, with its induction expected to give “the necessary impetus” to the Indian military, which seeks to enhance its missile strike capabilities amid heightened tensions with China over a border dispute in the Himalayas. No further details were provided about the weapon, which is still under development for the Indian Army.

Meanwhile, the PIB announced on 26 December that Indian Defence Minister Rajnath Singh laid the foundation stone for a new BrahMos Manufacturing Centre in Lucknow, for production of BrahMos-NG, the next generation of the supersonic cruise missile. Construction of the 200+ acre facility is scheduled to complete over the next two or three years, after which it is expected to yield 80-100 missiles annually. The move is part of the government’s ‘Make in India’ initiative, aimed at bolstering Indian defence industry as part of efforts to reduce import dependence. 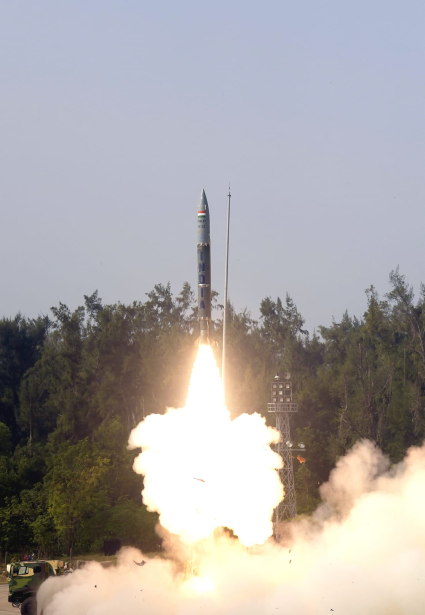 A test launch of the new Pralay missile. (Photo: PIB)