India’s Defence Research and Development Organisation (DRDO) announced on 11 January that the Navy test-fired a new, extended-range variant of the BrahMos anti-ship cruise missile, intended for deployment on its frontline warships.

The test not only certified “the accuracy of the ship’s combat system and armament complex,” but also validated the new capability the missile provides, a Navy spokesperson stated. No further details were provided on test or weapon, including maximum range, which in the previous BrahMos variant was 290 kilometres.

The original BrahMos is based on the Yakhont supersonic cruise missile, the export version of the Russian P-800 (3M55) Oniks missile. While the original BrahMos retains much of the Russian missile’s aerodynamic design and manufactured components, it uses a number of Indian-made onboard systems. Until recently, all variants of the missile were reported to have a range of 290km and carry a 2-300kg warhead.

The Project 15B (Visakhapatnam class) warships are a follow-on variant of the IN’s three in-service Project 15A (Kolkata class) destroyers. Construction of the three remaining Project 15B destroyers is ongoing, with second-of-class Mormugao expected to enter service next year, and Imphal in 2023. The keel of the fourth and final vessel on order was laid in July 2018.

The low-weight, fire-and-forget missile is launched from a man-portable launcher fitted with a thermal sight. The missile, believed to be armed with a tandem HEAT warhead, features a miniaturised IR imaging seeker as well as advanced electronics for on-board control and guidance, according to DRDO. It also features folding wings located behind the main warhead and four folding control fins at the rear.

The latest test in the final configuration indicates that the MPATGM is close to being ready for delivery to Indian Army units.

The man-portable ATGM may be close to making initial deliveries to the Indian Army. (Photo: DRDO) 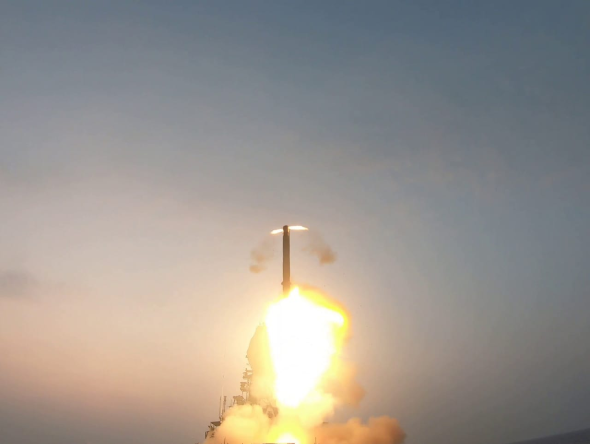 No information has yet been released regarding the maximum range of BrahMos ER. (Photo: DRDO)