The Indian MoD has contracted the country’s Heavy Vehicles Factory to manufacture and deliver 118 ARJUN MK1A MBTs with a contract value of Rs 7,523 crore ($1,014 million/€875 million), according to a 23 September statement.

The MoD concluded negotiations for the MK 1A buy in 2020, with a then-stated value of $888.7 million. The procurement was cleared by the MoD at the end of February 2021, by which point the contract value had increased to US$1.1 billion. It was then expected that five vehicles would be delivered within 30 months of contract award, with 30 tanks to be delivered each year thereafter, indicating contract completion in the 2027 time frame. However, the MoD press release did not provide any details of the expected delivery schedule.

The ARJUN MK 1A entered development in 2010 and the first variant was presented for user trials two years later. It was developed to address a number of faults identified with the original ARJUN MK 1, which entered development in 1986 and service in 2006. The requirement was actually issued in 1974, making the development (concept to service) of the ARJUN the longest of any tank in the world.

The programme has been beset by problems, and Indian sources have variously reported that the Indian Army would not be able to deploy the ARJUN MK 1 beyond the desert separating India and Pakistan, because of the vehicle’s weight. The MK 1A has not improved this, adding 6t to the gross vehicle weight; the 68t tank is therefore expected to exceed the capacity of much of the infrastructure in the west of the country.

Furthermore, India’s concept of defending its border in the event of a Pakistani invasion – known as ‘Cold Start’ – is reliant upon swift, fluid strikes across the border, inflicting damage and seizing territory without risking nuclear war. In this context, the ARJUN family may be unsuitable to the army’s needs, especially when compared to the relatively light 48t T-90S that is the army’s mainstay. 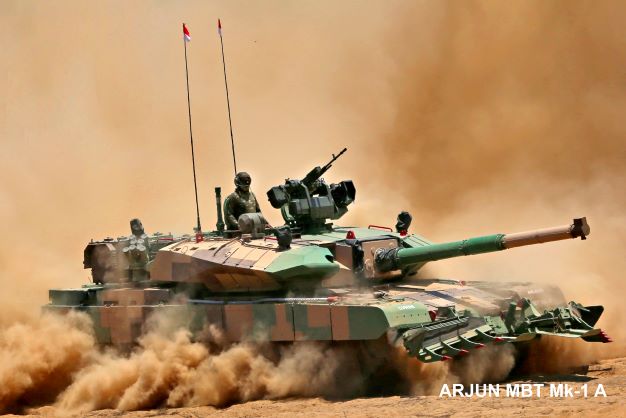 India is procuring 118 ARJUN MK1A MBTs, intended to introduce at least 70 improvements over the baseline ARJUN, in service since 2006. (Photo: Indian MoD)