India has been intensifying user validation trials of the indigenously-developed, helicopter-launched Helina anti-tank guided missile (ATGM), ahead of its formal induction into service.

Army and Air Force teams tested the third-generation, fire-and-forget system in April at varying ranges and altitudes up to 6,000m, the MoD stated, pointing out the missiles accurately engaged their simulated tank targets and that the trials were conducted from an Advanced Light Helicopter (ALH). The trials offered “proof of efficacy at high altitudes,” which has paved the way for integrating the missile – a variant of the indigenous, ground-launched Nag ATGM – on the ALH, the ministry stated. “With the flight-test, consistent performance of the complete system, including its imaging infrared seeker, has been established, which will enable the induction of the Helina into the armed forces,” added the MoD.

Previous user trials of the ATGM were conducted to validate the weapon’s capability to engage static and moving targets in desert conditions, at both minimum and maximum ranges.

According to the Defence Research and Development Organisation (DRDO), the Helina can engage targets in both ‘direct-hit’ and ‘top-attack modes. The system has an all-weather, day/night capability and been designed to defeat battle tanks equipped with conventional armour as well as explosive reactive armour.

Once user trials have been completed, the system will be inducted into the Army, while a variant of it – designated Dhruvastra – will enter service with the Air Force. 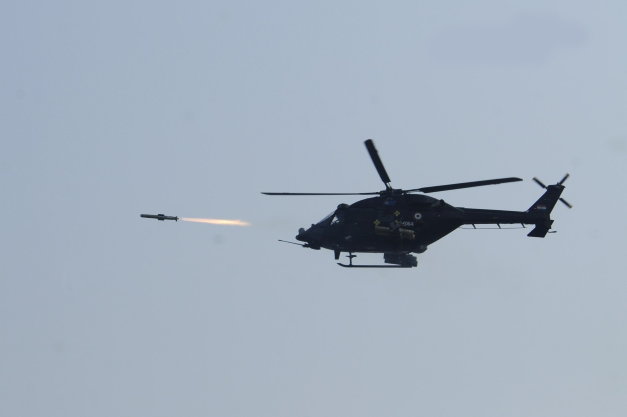 A Helina launch from an ALH. (DRDO)