India and US Strengthen Defence Cooperation

The United States and India have agreed to expand bilateral defence and security ties, and to step up military, technological and defence industrial cooperation in emerging defence domains, including space and cyberspace. The announcement was made during a ‘2+2’ meeting held on 11 April in Washington DC between defence and foreign ministers.

“As the Indian military emerges as a more jointly integrated force, the 2+2 Ministerial advanced initiatives that will allow the US and Indian militaries to work more seamlessly together across all domains of potential conflict—from the seas to cyberspace. The United States and India finalised major bilateral initiatives on information-sharing, liaison exchanges, and joint service engagements to support high-end, combined operations,” explained US Secretary of Defense Lloyd J Austin.

Among the agreements reached was the launch later this year of new defence space exchanges between US Space Command and India’s Defence Space Agency, as well as plans to begin talks on joint AI-related defence initiatives. The two sides also signed a space situational awareness arrangement that lays the groundwork for more advanced cooperation in space, and shared their desire to increase the scope and complexity of joint military exercises, while expanding logistics cooperation under the Logistics Exchange Memorandum of Agreement (LEMOA).

The Pentagon and the Indian MoD will also be deepening collaboration in cyberspace, including through training and exercises later this year, and expanding their information-sharing partnership across all warfighting domains, said Austin.

In terms of the trade and technology cooperation, the secretary said the two sides recently concluded an agreement to work together on air-launched UAVs, and agreed on the need to revitalise the Defence Technology and Trade Initiative (DTTI) with joint projects on military technologies. Moreover, new supply chain co-operation measures are to be launched “that will let us more swiftly support each other’s priority defence requirements,” he said.

Speaking about joint defence-industrial initiatives, Indian Defence Minister Rajnath Singh conveyed New Delhi’s desire to take the partnership towards “co-development and co-production” with US companies. “We called for increased investments by US defence companies in India under the ‘Make in India’ programme. Participation of US entities in industrial collaboration and partnership in research and development will be critical for success of India’s ‘Aatmanirbhar Bharat’ campaigns.”

Singh further noted his country has joined the multilateral Combined Maritime Force (CMF), based in Bahrain, as an associate partner. This, he said, will strengthen cooperation in regional security in the Western Indian Ocean. He also said that New Delhi is on course to implement the Communications Compatibility and Security Agreement (COMCASA) and complete implementation of the Basic Exchange and Cooperation Agreement (BECA). Along with LEMOA, these ‘foundational agreements’ are critical for India to deepen defence ties with Washington, particularly as it continues to procure US materiel.

On the latter point, Austin noted that after decades of relying on first Soviet- and then Russian-made defence systems, India is buying more US platforms. “That is forging important and new ties between our defence industrial bases […] We’re doing all this because the United States supports India as a defence industry leader in the Indo-Pacific, and a net provider of security in the region.”

Austin also noted that both countries are worried about China, which he said seeks “to refashion the region, and the international system more broadly, in ways that serve its interests.”

Against this backdrop, the two sides discussed new opportunities to co-ordinate more closely to ensure their “shared vision for a free and open Indo-Pacific region continues to thrive,” said the US DoD. The two countries also reaffirmed their commitment to expanding their strategic partnership with the Association of Southeast Asian Nations. 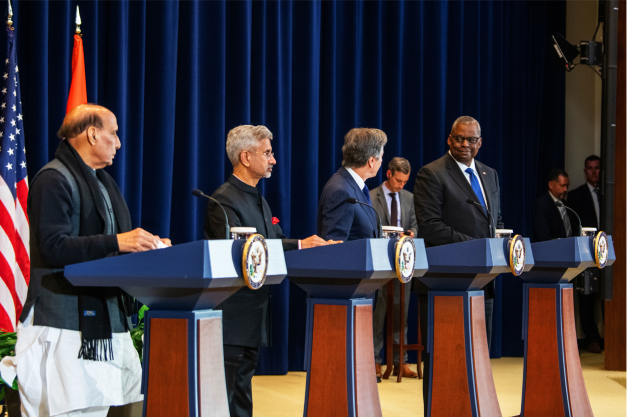