India and Russia have signed three defence cooperation agreements, deepening the relationship between the two powers and allowing for further growth of India’s defence industry. They were announced by various Russian sources on 6 December, following a summit attended by key government figures.

The most tangible agreement was signed between India’s MoD and Russia’s Kalashnikov Group for the manufacture of 600,000 AK-203 assault rifles in India. “Russian and Indian specialists have done a lot of preparatory work over three years to optimise the price and technological parameters of the project,” Kalashnikov CEO Vladimir Lepin, commented.

The two countries have established a joint venture – Indo-Russian Rifles Private Limited – with a production facility in Korwa, Uttar Pradesh. The initial agreement was signed in 2019 covering the production of the 200 series rifles and, according to Kalashnikov, now allows for all parts of the rifle to be produced in India.

A second agreement signed by Russian and Indian Defence Ministers, Sergei Shoigu and Rajnath Singh, provides for “military-technical cooperation” until 2030, according to TASS. The agreement covers cooperation between services as well as the “supply and development of armaments and other military hardware,” the Russian MoD stated.

A third contract, expanding joint production of spare parts for Russian-supplied equipment in India, was agreed between President Putin and Prime Minister Modi and announced by the Kremlin. This will be achieved through joint ventures and technology transfers, the Kremlin statement said, adding that the agreement also paved the way for India to export those parts onto “mutually friendly countries”.

The two leaders also discussed the requirement for a reciprocal logistics and support arrangement for the armed forces, according to TASS, but no further details were provided.

India and Russia have cooperated on defence for some time. Agreements have allowed India to move away from a reliance on European suppliers, and to procure an extensive fleet of Russian armoured vehicles. The new round of agreements allows for the growth of this cooperation, and ensures the Indian Army will continue to use Russian arms for some time.

That said, it is conceivable that the capabilities conferred on India by increased cooperation with Russia will one day enable the country to break away from its reliance on Russia. 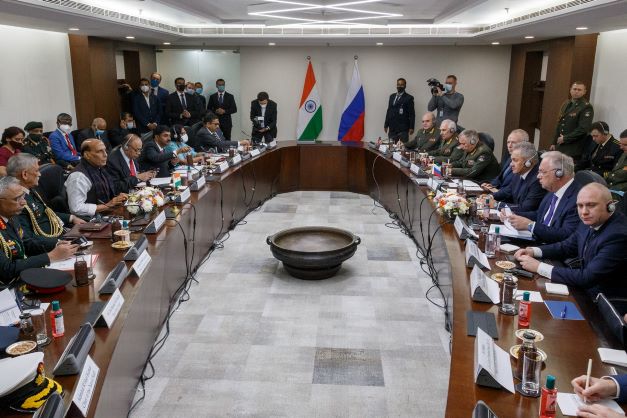 Agreements signed between Russia and India pave the way for India to produce a greater quantity of the defence equipment that it uses. (Photo: Russian MoD)