Two UGVs, working with Latvian troops, have proven the benefits of manned-unmanned teaming (MUM-T) according to an announcement by a European industrial consortium this week.

The IMUGS (Integrated Modular Unmanned Ground System) consortium, a team of 14 industrial partners, carried out the demonstration in September in Latvia. The troops ran through two scenarios in which two Milrem Robotics’ THEMIS UGV featured. One vehicle was equipped with ISR, SIGINT and RWS payloads, as well as software-defined radios and a smoke grenade launcher. The second vehicle was configured for a logistics role, and carried a jammer intended to defeat IEDs.

The EU’s IMUGS project was launched in 2020 to develop a modular, cyber-secure and scalable architecture for hybrid manned-unmanned systems. It has a budget of over €32 million, of which a maximum of €30.6 million will come from the EU. The project co-ordinator is Milrem, and the other members are Safran Electronics & Defense SAS and Nexter Systems of France; Talgen Cybersecurity Ou (formerly GT Cyber Technologies Ou) and Kaitsevae Akadeemia (the Estonian Military Academy) of Estonia; Bittium Wireless Oy and Insta Defsec Oy of Finland; GMV Aerospace and Defence SAV of Spain; Germany’s Krauss-Maffei Wegmann GmbH and Diehl Defence GmbH; Latvijas Mobilais Telefons SIA of Latvia; and three Belgian entities – (Un)Manned NV, Ecole Royale Militaire (the Royal Military Academy), and Dotocean NV. The next of six planned IMUGS demonstration will take place in Finland during the first quarter of 2022. 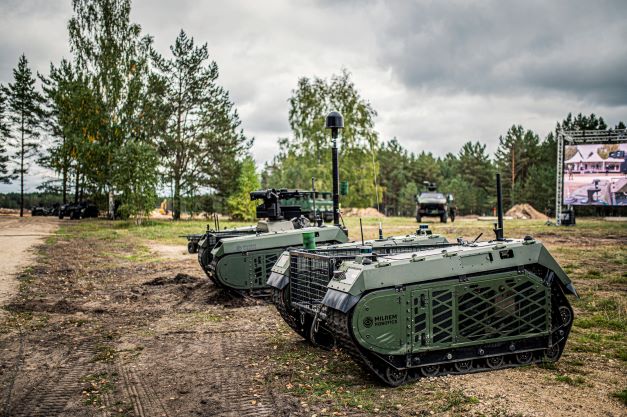 The two THEMIS vehicles during the demonstration. (Photo: Milrem Robotics)