At ILA, Rheinmetall displayed a wide range of systems and services aimed at protecting people, equipment and infrastructure in the digital aviation age. Highlights included:

Unmanned systems and robotics: the current product portfolio of unmanned systems, including the LUNA NG (Next Generation) UAS as the latest development for unmanned airborne reconnaissance, classification and recognition of objects in real time, and as a platform carrier for a wide range of payloads and missions. The company demonstrated how its various Smart Multipurpose UAVs can enhance the sensor systems of vehicle platforms and improve situational awareness;

Loitering munitions: precision loitering munitions (LM) combine the characteristics of drones and guided missiles. They enhance the ability of even small units to reconnoitre target zones from above, as well as enabling high-precision standoff engagement of targets. Rheinmetall and its partner UVision have entered into a cooperation agreement to market UVision’s Hero family of LM in Europe. At ILA, the two companies highlighted possibilities for integrating various Hero LM systems into manned and unmanned vehicles;

Air defence: mobile, modular, and scalable, ground-based air defence systems are gaining new importance now that NATO armed forces are focusing once again on defending national and allied territory and airspace. Here, being able to engage UAS and LM is especially important. At ILA, Rheinmetall displayed a Boxer 8×8 configured for an air defence role, topped with the Skyranger30 turret with an integrated surface-to-air missile launcher, a combination particularly capable of performing this vital task;

Mobile starter units: Rheinmetall supplies mobile starter units for civilian and military aircraft engines. Compact, reliable, and inexpensive to operate, these high-performance, virtually maintenance-free systems have turned Rheinmetall into an established supplier in this market. Powered by a turbine, the devices not only help to start the engine, but also supply compressed air for the air-conditioning system onboard the aircraft. At this year’s ILA, the MSU-GP 200T was on show, a turbine-powered air start unit that can also supply the aircraft with 90 kVA of electric power.

Late last year, Rheinmetall presented the world’s first fully electric mobile start unit, the eMSU, which can be used in all weather conditions. Designed to meet the most stringent emission requirements, it significantly cuts air pollution at airports, thus improving air quality. At ILA 2022, Rheinmetall showcased its extensive expertise in counter-drone operations and
protection systems, as well as in simulation and training, and technical documentation. 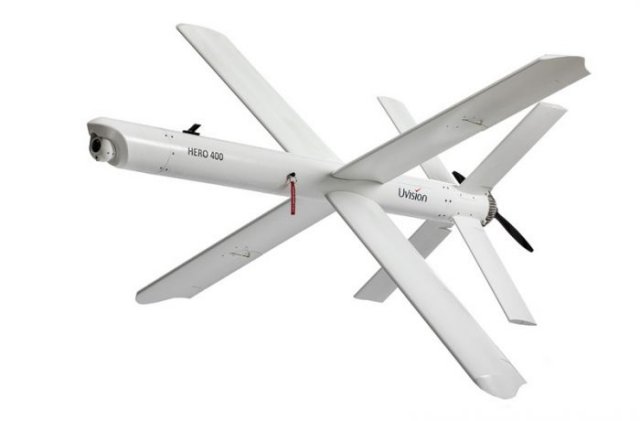 Hero 400 is a member of the family of loitering munitions that UVision and Rheinmetall will now be marketing across Europe. (UVision Air)