The German Armed Force (Bundeswehr) awarded Rheinmetall a contract worth the gross value of €370 million to supply Future Soldier – Extended System (IdZ-ES) soldier systems to equip 68 infantry platoons. The new systems will be delivered between 2018 and late 2020. The Bundeswehr has so far procured three lots, a total of 90 systems, each of which is designed to equip a ten-man section or squad. The 68 platoon systems are enough to equip over 2,460 soldiers. Based on what Rheinmetall calls a holistic, total infantry system concept, IdZ-ES integrates infantry and mechanized infantry platoons and their vehicles, serving as base stations, into the network-enabled warfare loop.

Hensoldt is to deliver optical units for the IdZ-ES soldier modernisation programme. The include the IRV 600 A1 infrared (IR) attachment, the NSV 600 night vision attachment, the ZO 4×30 optical sight, the RSA-S reflex sight, the SPOTTER 60 spotting scope, the ZF 6-24×72 telescopic sight and additional accessories. The order’s total value of the order is over €29 million.

“We are very happy about the trust placed in us and our products by the Bundeswehr and that we can make our contribution to the modernisation of our armed forces with an order of this size,” Andreas Hülle, Managing Director of Hensoldt Optronics, said. “The new sights enable infantry soldiers to better reconnoitre and identify even at long distances and with poor visibility.”

The IRV 600 A1 IR attachment is an uncooled, noiseless thermal imaging device. With a resolution of 640×480 pixels it enables the highest geometric resolution, to provide users with as much information as possible. This unit is more compact and about 28% lighter than its predecessor, the IRV 600.

The NSV 600 night vision attachment can be used together with daylight optical sights, making sure soldiers benefit from the four times magnification of the ZO 4×30 basic optics, even in low light situations.

The ZO 4×30-IdZ optical sight serves to quickly acquire targets and to quickly and reliably take aim at them. Its wide field of vision of 8° makes it possible to monitor a scene over a wide area.

The RSA-S reflex sight is intended for use as a red dot sight to acquire targets at close range. This reflex sight, weighing only 100g is waterproof and extremely resistant to shocks and vibrations.

All sights can be quickly and easily fixed to the weapon, without additional tools being required, via Picatinny rail and NATO rail, according to STANAG 4694. These units are all modular, i.e. the soldier can use the optics not only on their own, but also in combination with other units. Furthermore, in low light situations and/or very bright days, the weapon does not have to be readjusted.

One of Elbit Systems’ subsidiaries was recently awarded a contract from an undisclosed European country for thousands of advanced electro-optic systems for individual infantry soldiers, in a total amount of an approximately $35 million. The contract will be performed over a two-year period. With the company not disclosing any further information, MONS believes it is night vision equipment for the IDZ-ES. CORRECTION: According to sources in the German procurement office, the BAAINBw, over 4,000 of the very light XACT nv33 micro NVG binocular (450g) has been sold to the German Armed Forces (Bundeswehr), to be used service crossing with the army, navy, airforce and Joint Forces Command. See story here.

Rheinmetall says special attention was given to the core and helmet system (the latter being manufactured by Hexonia). The battery-powered core computer, worn on the soldier’s back and called the electronic backbone by Rheinmetall, controls all the devices and sensors carried by the soldier via various interfaces. Its principal functions include power supply management, access control and monitoring, the soldier information system for map and situation display, navigation, reporting, exchange of reconnaissance and target data, processing sensor data (e.g. own position, line of sight), operator interfaces and visualisation, as well as system configuration.

The soldier can control the Soldier Command System and communication via a manually operated control and display unit known as the BAG (developed by Rheinmetall Defence Electronics (RDE)). All relevant data concerning current situation, position of friendly forces (blue force tracking), mission and system status are displayed either on the BAG or, alternatively, on an OLED (organic light emitting diode) helmet display, by Challenge.

The modular battle dress uniform can be readily adapted to meet the current environmental and temperature conditions. Other important features include the ballistic body armour (Protection Class 1) with integrated ventilation shirt as well as a modular harness for carrying ammunition, ordnance, the “electronic backbone” and additional equipment. The IdZ-ES protective vest comes complete with chest rig and hip belt; with added ballistic inserts, it offers protection up to German Level 4.

The section or squad leader and his assistant are both issued with an additional leader module consisting of a portable command computer operated via touchscreen. A rifle-mounted push-to-talk button (by RDE in cooperation with partners) enables wireless communication even when the operator leader has raised his weapon. Furthermore, small arms can also be fitted with optical and optronic devices of the latest generation (see above). 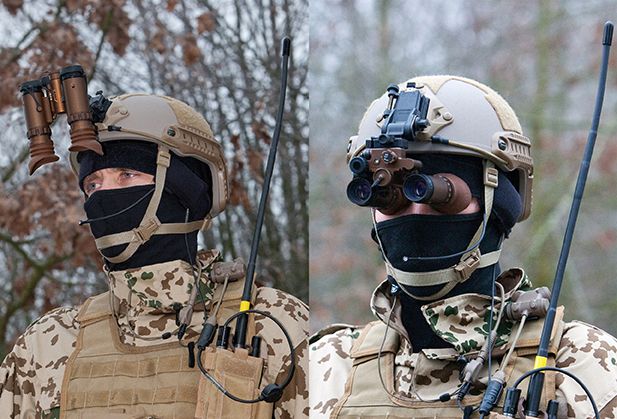