IDEX: Otokar will Focus on ARMA 6×6 and COBRA II

Increasing Presence and Opportunities in Region

During IDEX Otokar is focusing visitor attention on its ARMA 6×6 vehicle with BOZOK turret and the COBRA II mounting a KESKIN turret.

The ARMA 6×6 modular armoured vehicle offers superior mobility, couple with high mine and ballistic protection, and options for the integration of medium- and high-calibre weapon systems. Offering high tactical and technical performance, ARMA comes with an amphibious option for peacekeeping and humanitarian assistance operations in the most demanding terrain and climatic conditions. The ARMA 6×6 stands out for its high payload capacity and large internal volume. It can be equipped with a variety of weapons and turrets, according to the customer’s specific needs and the whole family can be used for a wide variety of missions: as an armoured personnel carrier, armoured combat vehicle, command and control or CBRN reconnaissance vehicle.

The COBRA II, displayed with the KESKIN turret system at IDEX, offers users high protection and mobility in operations, as well as a significant internal volume. In addition to superior mobility, COBRA II can accommodate nine personnel, including driver and commander, and delivers high performance in the toughest terrain and climatic conditions, having been rigorously tested in several testing environments worldwide. The vehicle has an amphibious option and, with a wide variety of potential weapons and mission systems fits, is successfully used in border protection as well as internal security and peacekeeping missions. Its modular structure gives COBRA II the flexcibility to be used as personnel carrier, weapons platform, ground surveillance radar vehicle, CBRN reconnaissance vehicle, command and control vehicle and ambulance. COBRA II is already in service with the Turkish armed and security forces, as well as with export customers.

With the expansion of its vehicle family, Otokar has now turned its focus to turret and weapon station development. With over 30 years’ expertise in turret systems design and integration, the company has developed the MIZRAK, BOZOK, BASOK, UCOK and KESKIN remote controlled turrets, with weapon fits ranging from 7.62-30 mm. With its high-performance, high-tech turret systems, Otokar aims to strengthen its platforms and maintain competitive advantage in the global market.

“Apart from being the leading supplier of the Turkish military and security forces for land systems, over 30,000 Otokar military vehicles serve almost 55 different end users in 32 countries. Our strength in the defence industry is driven by our experience, engineering and R&D capabilities, and successful use of technology,” stated General Manager, Serdar Görgüç.

The GCC countries represent a particularly important market for Otokar: a variety of vehicles from across the company’s wide range have been serving in regional forces since the early 2000s. A broad range of activities in the UAE led to the establishment of Otokar Land Systems there in 2016 and that has helped enormously in strengthening relationships, according to Mr Görgüç. The company now plays a wider role, he says, having transformed from being a simple supplier of product to a more comprehensive solutions provider, offering maintenance, repair and overhaul (MRO) services as well as technology and transfer and sharing of expertise. The Al Jasoor joint venture company signed a significant contract with the UAE armed forces for the RABDAN 8×8 armoured vehicle last year – and the vehicle will be on display during IDEX.

“With the aim of increasing our presence in the region, IDEX is an important opportunity for us to meet our existing users as well as potential users. We believe that our vehicles serving worldwide are the most important reference for our potential users. We will use our unique experience in response to the unique needs of the region in the best possible way,” Mr Görgüç added. 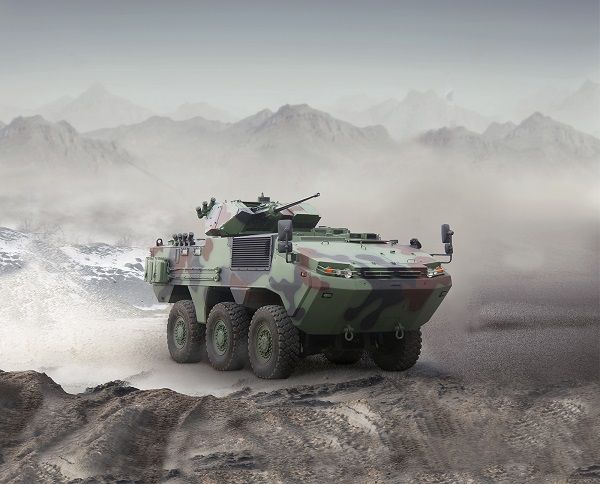 The ARMA 6×6, which offers a number of different weapons and mission systems options, provides potential users with a flexible protected platform capable of undertaking a wide variety of missions. (Image: Otokar)