The DITA self-propelled howitzer – in NATO-standard 155mm/45 configuration – made its Czech debut at IDET 2021 in Brno this week. Previously, this latest addition to the family of existing autonomous artillery platforms developed by Excalibur Army, another Czechoslovak Group (CSG) subsidiary, has been exhibited only to export-oriented markets, during IDEX in Abu Dhabi earlier this year and MSPO in Kielce (Poland) last month.

The fully automatic system – being shon at this early stage in the form of a technology demonstrator – features a modular concept, a two-member crew (commander plus gunner) operating from an armoured cabin, as well as an autonomous turret, based on a TATRA 8×8 chassis – either a modernised TATRA VP31 or a TATRA FORCE, depending on customer requirements. As an emergency situation safeguard, a manual mode of operation, with a gunner operating from inside the turret, is also provided for. The company has longer-term plans for a future ammunition supply vehicle to accompany the weapons platformas well. Even more importantly, its chassis and cabin have been completely redesigned and conform to the STANAG 4569 Level 1 ballistic protection standards.

The weapons system also enables potential basing of its fully autonomous turret on a completely different or tracked chasis, in accordance with the specific needs of potential customers. This newly-developed platform is intended as both a replacement for the reliable but ageing original DANA 152mm system (dating back to 1977) – including its more modern M1 and M2 derivatives – and/or for customers with a requirement for a short-barrelled system using standardised 155mm ammunition. The elevation of the main armament ranges between -3/+70° and the weapon can achieve an effective range of up to 39km, a sustained rate of fire of 5rpm and has onboard ammunition stowage for a total of 40 rounds.

These initial parameters will be the subject of further trials, validation testing and certification procedures, however. DITA is also capable of the Multiple Rounds Simultaneous Impact (MRSI) mode of fire, and features the Automatic Setting of Action Position (ASAP) guidance system. In addition, the system has already undergone an initial round of testing and trials, including live firings in neighbouring Slovakia. The maximum vehicle weight is 29t, maximum road speed of 90km/h (25km/h on rough or difficult terrain) and its road range extends to around 600 kilometres. 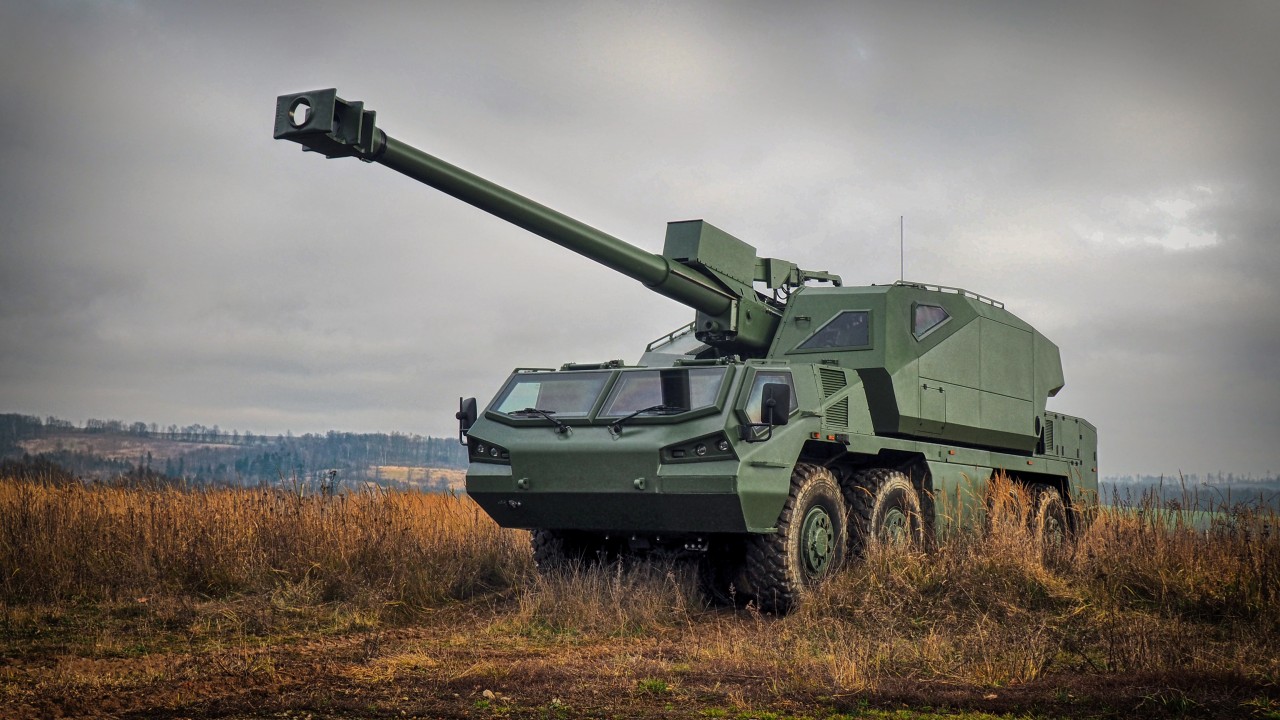 DITA has been shown to the public in the Czech Republic for the first time at IDET 2021. (Photo: Excalibur Army)