Heavily purged following the abortive July 2016 coup against the Islamist government of President Recep Tayyip Erdogan, the Turkish Air Force (Türk Hava Kuvvetleri – THK) now faces a period of major modernisation and re-equipment, a programme that will include an unprecedented switch to indigenously-produced aircraft types and whose success cannot be guaranteed. At the same time, Turkey’s alliances seem to be shifting, with a move away from the US – which has been Turkey’s most important military partner and principal arms supplier for more than 50 years.

The first controls nine major bases and 14 reserve airfields, with 11 active frontline fast-jet combat squadrons plus three more that are currently inactive, waiting to convert to the F-35. These are augmented by one squadron with armed UAVs (ANKA, HERON, PREDATOR and REAPER) and four UAV/UCAV squadrons with BAYRAKTAR, HERON and ANKA air vehicles. There is also one fast-jet tactical fighter/reconnaissance squadron, one fast-jet test and evaluation squadron, one airborne warning and control system (AWACS) squadron and one tanker squadron, together with the Türk Yildizlari (Turkish Stars) aerobatic team, the last squadron still operating the NF-5A and NF-5B FREEDOM FIGHTER. There are also eight SAM squadrons.

The backbone of the THK’s combat capability is provided by the F-16 FIGHTING FALCON, eight of which were supplied direct from the US and 262 built locally under license by Turkish Aerospace (TAI) from 1984. The Common Configuration Implementation Programme (CCIP) upgrade to 217 F-16s (38 Block 30, 104 Block 40 and 76 Block 50 aircraft) seeks to bring them all to the Block 50+ standard with APG-68(V5) radar, a secure voice communication system, an advanced electronic warfare (EW) suite with new radar warning receivers, the Joint Helmet-Mounted Cueing System, Link 16 datalink, advanced IFF interrogator/transponder and compatibility with the AGM-88 HARM anti-radiation missile. Before the upgrade, some F-16 units were LANTIRN specialists, while Block 50 squadrons used HARM. After the upgrade, all units will have both of these capabilities, and many others.

One F-16 squadron has a reconnaissance capability, using SNIPER and DB.110 pods, which have allowed the aircraft to replace the RF-4 PHANTOM, which has now been retired in Turkey, with the last aircraft having been withdrawn from service in 2015. The THK now has a space-based reconnaissance capability, with the launch of the GÖKTÜRK-1 and -2 satellites in 2012 and 2016.

Some F-16 units have a nuclear strike tasking. Turkey is one of five member states which participate in the NATO nuclear sharing policy, together with Belgium, Germany, Italy and the Netherlands. Some 90 US-owned B61 nuclear bombs are housed at Incirlik, 40 of which are allocated for delivery by the THK if authorised by NATO.

Some 54 F-4Es were upgraded to the F-4E-2020 TERMINATOR standard, with structural modifications, lightweight wiring, an advanced EL/M-2032 pulse doppler radar, a Kaiser EL-OP HUD, new multifunction displays and HOTAS controls,and new mission computers, navigation systems and targeting and EW pods. The F-4E-2020 can carry the AGM-142 POPEYE/HAVE NAP air-to-surface missile (ASM) and has provided the THK with its heavy stand-off attack capability, though the introduction of the indigenous Roketsan SOM cruise missile has now given the F-16 a similar capability.

The TERMINATOR entered service on 27 January 2000 and equipped three frontline units. Just one squadron remains active today and the type is scheduled to be replaced by the F-35 JSF – better known as the F-35 Müsterek Taarruz Uçagi (MTU) in Turkey.

Turkey became a Level 3 partner in the F-35 development programme on 11 July 2002, subsequently joining the production phase. The nation initially signed up to purchase 116 examples of the conventional take-off and landing variant – the F-35A LIGHTNING II, though the requirement was subsequently scaled back to 100 aircraft. The first F-35A destined for the THK made its maiden flight at Fort Worth on 10 May 2018. The first two F-35 MTUs were formally handed over in a ceremony at Fort Worth on 21 June 2018, becoming the first fifth-generation fighters in the Turkish Air Force Command inventory. They were then flown to Luke AFB for pilot training to begin and deliveries to Malatya were expected to start late in 2019. The aircraft’s future in THK service is now looking extremely uncertain, however, after the US Congress passed legislation temporarily banning deliveries of the F-35 to Turkey and looks set to halt deliveries altogether, as a response to the Turkish S-400 SAM acquisition. If the F-35 is cancelled, it will have a major impact on plans to retire the F-4 PHANTOM and F-16.

While Turkey can field impressive numbers of combat aircraft, manning its squadrons is more problematic. Following the 2016 coup, large numbers of air force officers were purged and more than 300 F-16 pilots were dismissed. The Turkish government was forced to issue a decree forcing 330 former air force pilots to return to air force duty for four years, threatening to revoke their civilian licenses if they failed to comply. One base, Akinci, was closed and its squadrons redistributed, in punishment for the part its officers had played in the coup. But even with the recall of airline pilots to the THK, the service is facing a major manning crisis, which has forced a growing reliance on SAMs for air defence. This may explain, in part, Turkey’s determination to push ahead with its planned S-400 procurement.

Since the Russian S-400 system cannot be integrated into NATO’s infrastructure, it cannot be used for ballistic missile defence and to provide this, Turkey has signed an agreement with Eurosam to develop a long-range anti-aircraft missile. Turkey will use the S-400 to defend against hostile aircraft and the Eurosam-developed weapon to protect against ballistic missiles.

As well as its plans to acquire the F-35, Turkey has also launched a national fifth-generation fighter programme, with the intention of replacing the F-16 with the indigenously-produced TF-X, which is due to fly from 2023. The TF-X is being developed by TAI with technological assistance from BAE Systems and is to be a more air defence-optimised aircraft than the F-35, which it is designed to augment. The TF-X will feature reduced detectability, a low radar cross-section and internal weapons bays, incorporating sensor fusion and improved situational awareness, high manoeuvrability and the ability to supercruise. The twin-engined aircraft will be equipped with an advanced Aselsan active electronically scanned array (AESA) radar using gallium nitride (GaN) technology.

Air Logistical Command (Hava Lojistik Komutanligi) is headquartered at Etimesgut-Ankara and controls four transport aircraft squadrons at two principal bases. One is a VIP and executive transport unit, equipped with Airbus A330, A319, Cessna (now Textron) 550/560/650, and Gulfstream G.IV-SP aircraft, while another operates the CN235 – including a handful of EW and electronic intelligence (ELINT)-configured variants. The remaining two units operate the C-130 HERCULES and the Airbus A400M and C160D TRANSALL. 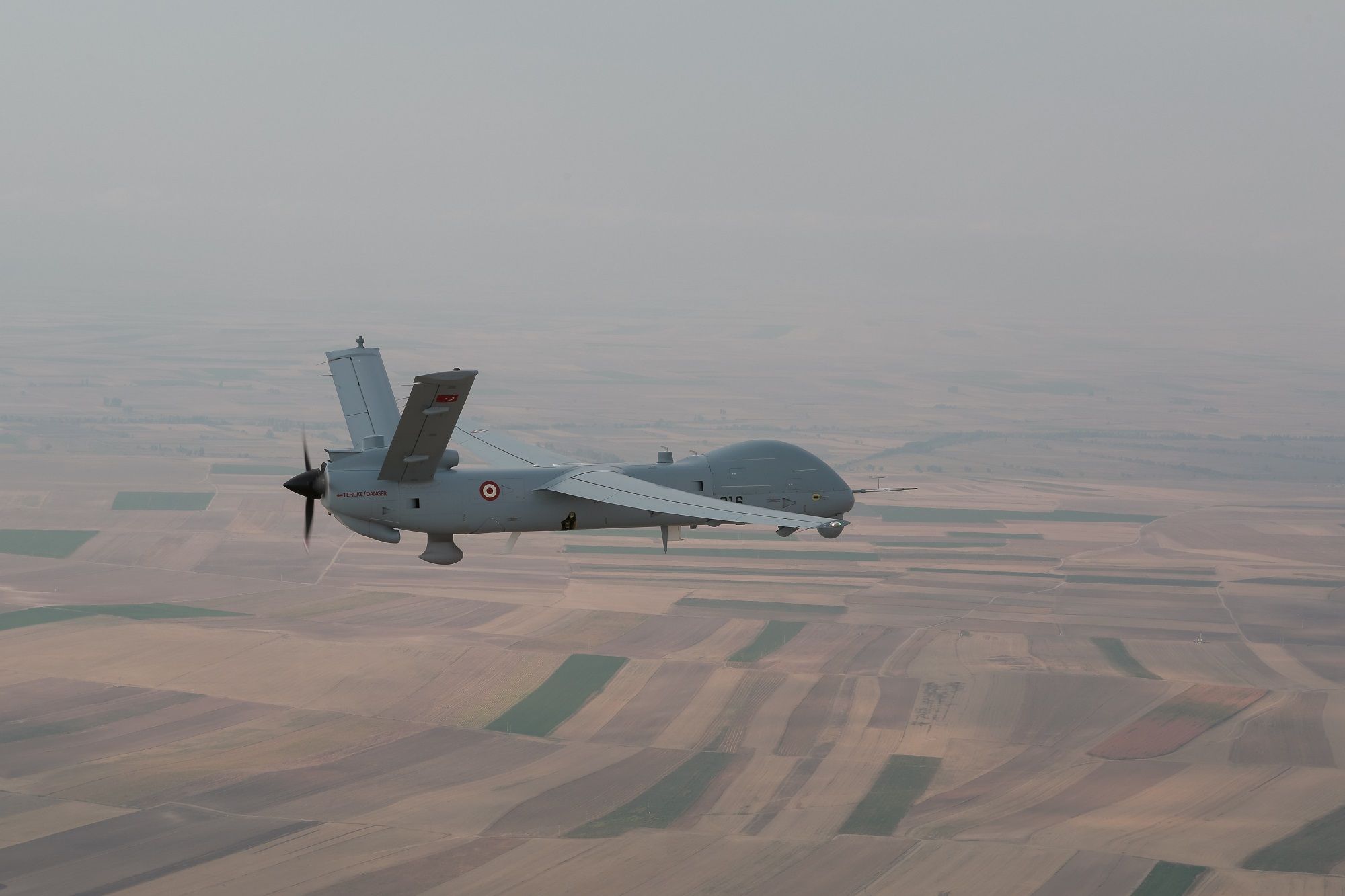