Otokar is showcasing a number of advanced vehicles at IDEF 2021 in Istanbul this week, among them the AKREP IId – the diesel variant of the AKREP II – and the COBRA II MRAP, both of which will be unveiled for the first time during the exhibition. Also on display will be ARMA 6×6 and 8×8 platforms, as well as the TULPAR range of tracked vehicles. Company-designed turrets will round out the Otokar offering.

General Manager Serdar Görgüç emphasised that almost 33,000 Otokar military vehicles serve in over 35 nations, including NATO member states. With many firsts to the company’s name, “we are always ready to serve users with our wide product range, engineering capabilities, and experience. We will introduce our capabilities in land systems to potential users during IDEF and further develop our cooperation with our existing clients,” he stated.

The AKREP 11d is the newest member of the AKREP II 4×4 family, designed as an armoured reconnaissance, surveillance, and weapons platform. Featuring a reduced silhouette, high mobility, and survivability compared to the original AKREP, launched in 1995, AKREP II features a modular structure and can be fitted with weapons up to 90mm calibre. AKREP IIe – the first electric variant in the range – was launched in 2019 and Otokar now unveils the much anticipated AKREP IId diesel.

The four-wheel drive system and optional steerable rear axle give the vehicle excellent manoeuvrability – the four-wheel independent suspension and swift torque control of the power pack mean AKREP II can travel cross-country over challenging terrain, traversing deep mud, snow or water with equal ease. The vehicle’s manoeuvrability is crowned with a crab steering motion, which comes with a steerable rear axle.

The vehicle’s drive-by-wire feature mean it can be remotely operated, providing for tele-operated or fully autonomous operations. Turrets mounting weapons up to 90mm calibre can be integrated and the vehicle can be adapted to a wide variety of missions. 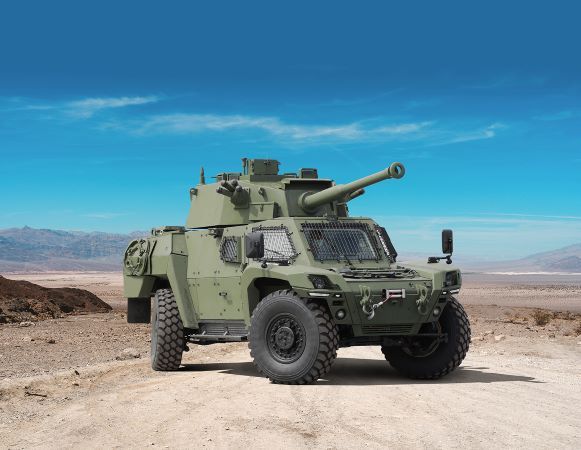