With an as yet undisclosed launch customer, the BARAK ER is already in production, according to IAI. The system offers capability at ranges  up to 150km against airborne and ballistic threats. The extended range is a function of having adjusted the capabilities of the MMR radar and the system is aimed at both maritime and ground-based applications. All the system components – radar, launcher, missiles and C2 centre – are produced in-house, according to President & CEO< Boaz Levy. Development forms part of an effort to provide unprecedented levels of capability to foreign countries, the company says.

“The BARAK ER revolutionises air defence with unprecedented flexibility, both in real-time full net-centric combat management as well as with unique smart launchers , that are capable of independently launching and managing any mix of interceptors without a dedicated command post on-site,” the company stated.

The BARAK family of advanced operationally-proven air defence systems is deployed with a number of armed forces around the world, among them the Israeli Navy and the Indian Air Force, Army and Navy. According to IAI , BARAK provides wide-area protection against a range of air, sea and ground threats, including ballistic, ground-to-ground, and cruise missiles, UAS, and helicopters. BARAK consists of several technologically advanced systems: interceptors for a variety of ranges; advanced homing seekers; digital MMR or MFSTAR radar for naval platforms; C2 systems; and unified launchers for different ranges.

IAI claims these systems are complemented by breakthrough communication and connectivity capabilities, providing the user with optimal force activation using several batteries or ships for the multidimensional battlefield. 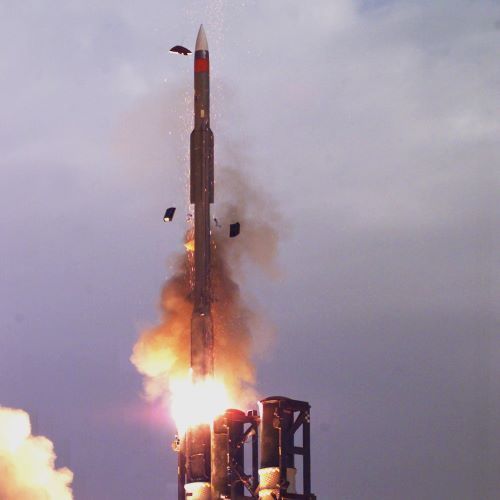 The BARAK ER was inspired by a desire to provide select foreign customers with unprecedented levels of capability. (Photo: IAI)