The Israeli Air Force (IAF) has amended its original Letter of Acceptance (LoA) for Boeing KC-46A PEGASUS tankers is now asking the United States for ‘emergency delivery” of four aircraft. The change was made after the Israeli MoD was slow in making the official request. “The process took three times the time it should have taken,” a senior defence source stated – though the MoD declined to comment.

The original IAF request – approved last year – called for two aircraft within two years, delivered by ‘tail swapping’ – diverting aircraft procured by the US Air Force and delivering them to the IAF instead. The IAF, however, now has a very urgent operational requirement for new tankers, to replace its old 707s modified by Israel Aerospace Industries (IAI). The requirement covers eight aircraft and related equipment for an estimated $2.4 billion (€2.1 billion) and plans to equip them with as-yet unspecified ‘special systems.’

The MoD issued the formal Letter of Request (LoR) in May 2019, after the IAF pressured the Ministry to do so. It called for two aircraft. The issue of the LoA was then delayed for over two years by what a source told MON was “pure bureaucracy.” The process now confronting the Ministry is the formal amendment of the LoA to request the USAF give up four of its delivery slots so that the IAF can receive its first new tanker at the end of 2023 and the second six months later. If the amendment is approved, the other two aircraft will be delivered in 2025 and 2026.

Proof of the urgency of the IAF’s requirement came recently when it was forced to retire a 707-based tanker – manufactured in 1959 – after 34 years’ service. 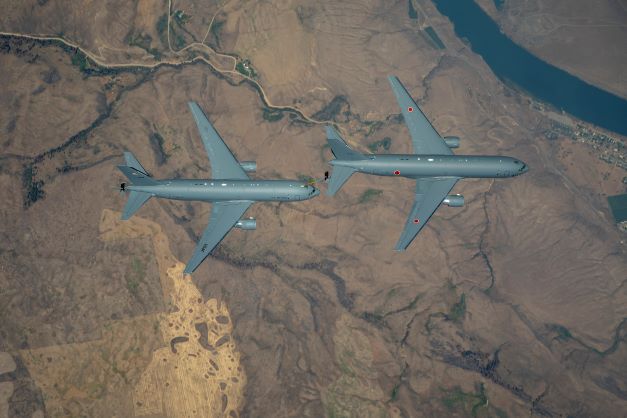 Israel may receive the first of its requested KC-46A multi-role tankers in late 2023. (Photo: Boeing/Kevin Flynn)