The MCS is an advanced communications satellite weighing approximately 700kg on launch. It includes a complete digital communications payload weighing up to 200kg and this low weight enables its launch as a ‘rideshare’ with other satellites, significantly reducing launch costs. With an expected life span of no less than 14 years, the satellite is designed to provide multi-zone communication services to customers with diverse communication needs.

MCS leverages over thirty years’ experience with various satellites and the capabilities developed initially for DROR 1, designed and built by IAI for Israel’s national communications needs. Most of these capabilities were developed in-house by IAI, including an advanced digital communications payload and ‘space smartphone’ capabilities that provide operators with through-life flexibility. In addition, the command programme and development architecture allow for applications being loading from a ground station during orbital operations, to adjust and modify assignments in accordance with changing communications needs. The MCS is fully digital, with a flexible communications payload and applications, features high performance and multi band capabilities, with up to four steerable antennas – and is cyber protected. It enables scalability, modularity, redundancy, and a short-term response to traffic demand.

“The development of the innovative MCS is a testament to IAI’s broad space capabilities. It features high-end space technology in a controlled-budget solution designed for countries and communication operators with no need for communication satellites of the more common size. The mini satellite MCS offers a new concept to the communication satellite market, serving as a complementary or a focused regional system,” explained Shlomi Sudri, General-Manager of IAI’s Space Division. “The MCS allows IAI to offer full satellite capabilities at a competitive price and expand into new satellite markets.”

The Israeli government commissioned IAI to develop and build DROR 1, the next-generation national communications satellite, in early 2020. The company has invested significant resources in developing Israel’s strategic communication satellite capabilities, including the development of DROR 1 and MCS. It has also recently launched BLUE SPHERE, a cloud-based ground station for satellites, which significantly increases data flow and enables persistent Earth communications.

A cloud-based virtual ground station enhances satellite output availability, reducing dependence on ‘satellite passing time’ above a specific ground station. Instead, the satellite broadcasts to any available ground station, from which the data is transferred immediately to the cloud, allowing on demand extraction. The unique concept was developed by space engineers as part of an accelerated programme at IAI’s Innovation Center and in collaboration with the international Starburst accelerator, which specializes in aviation and space innovations in some of IAI’s in-house ventures.

“Evolution of cloud technologies allowed IAI’s space engineers to develop Blue Sphere, which makes satellite information available around the clock. BLUE SPHERE joins other innovative command and control developments that maximise satellite capabilities and the operational level of satellite deployments,” Sudri stated. “Following the proof of concept, we are currently working on an advanced version of the ground and virtual command and control stations for the benefit of our global customers.”

Dr Amira Sharon, IAI’s Executive VP of Technology and Innovation, added “Innovation is critical for companies, like IAI, that feature technological and human excellence. This state-of-the-art development is a testament to the fast development processes taking place at IAI, forming the building blocks of its future technologies.” 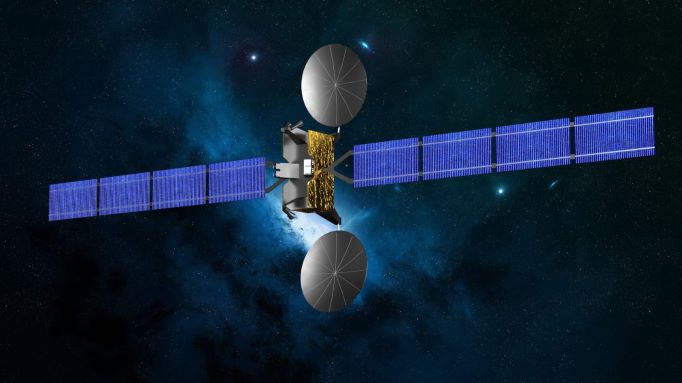 A rendering of the new MCS. (Image: IAI)