The PTMT was designed as a deployable, low-cost cockpit training solution to enable trainee pilots to practice mission tactics and co-ordination in networked and joint environments. It comprises a fully integrated cockpit shell with a curved display monitor, a specially designed control stick that can be switched between centre and side positions, and a touchscreen display that can be configured to represent a generic 3rd/4th-generation combat aircraft. Now, with the addition of the XR-3 headset, trainees are no longer limited by the size of the monitor, and can become more fully immersed in the flight simulation.

As well as presenting the trainee with a 360° animation, the headset also enables real-time eye-tracking. This capability means trainers can instantly assess whether the trainee’s visual attention is focused on the correct part of the cockpit for that phase of the mission. The data file generated by the eye-tracking system can be viewed afterwards by both pilot and instructor, to ensure the post-mission debrief is as thorough as possible and maximum use is made of all learning opportunities.

The company demonstrated the integrated system at I/ITSEC last week, with a representative simulation of a low-altitude, high-speed flight over terrain in Albacete, Spain, including sections of dense urban environment as well as a 3D replica of Los Llanos Air Base. The eye-tracking capability was also demonstrated. 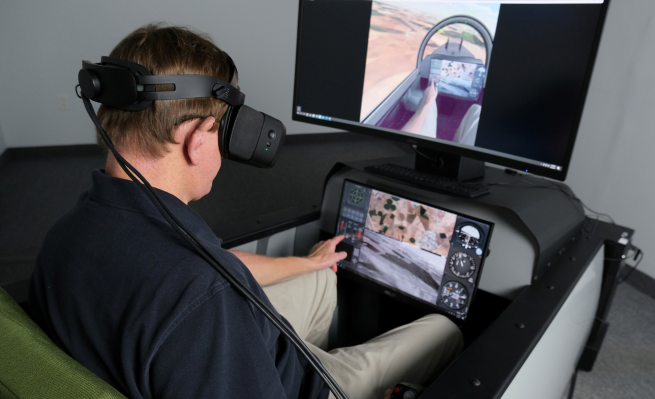 A trainee using the XR-3 headset in the PTMT. (Photo: MVRsimulation)