No good news for the EU’s proposed embargo on Russian oil – aimed at erooding Russian ability to finance the war in Ukraine. EU foreign ministers’ attempt on 16 May to convince Hungary to approve the 6th package of sanctions resulted in a stalemate.

Landlocked Hungary is heavily reliant on Russian energy and did not lift its veto on the package, despite recent offers giving it until 2024 to phase out Russian oil. At the Council, the Hungarian Foreign Minister Péter Szijjártó said phasing out Russian gas would cost Budapest between €15-18 billion of infrastructure modernization, and called on the EU to present a plan. As a result, EU High Representative Josep Borrell said the package had been referred to the Coreper (the Council’s Permanent Representatives Committee) to clarify technical issues on timings and costs. However, he could not state how much time this would take.

Although Borrell spoke of Budapest’s “economic” rationale, there is widespread opinion the Hungarian move is primarily political, aimed at maintaining the stalemate over the oil embargo, given Budapest’s close links with Moscow. The EU is being  “held hostage by one member state” was the comment made by Lithuanian Foreign Minister, Gabrielius Landsbergis.

Borrell explained that, as sanctions “have collateral effects on those who sanction,” it is crucial to find a balance between damage inflicted and that received. However, he commented, in the end, Brussels has “to get rid of energy dependency” on Russian coal, gas, and oil, as this makes the EU “vulnerable […] It has to be done progressively, as quickly as possible, but it has to be done.”

Ministers also discussed support to Ukraine. The Council is currently considering providing an additional €500 million to its EU Peace Facility, to continue support Ukraine militarily, bringing the total amount to €2 billion, Borrell explained. Meanwhile, the bloc is also helping Ukraine to keep producing and exporting grain and wheat worldwide, through the action plan for EU-Ukraine Solidarity Lanes, as the blockage of exports is having a severe impact in Europe and beyond. 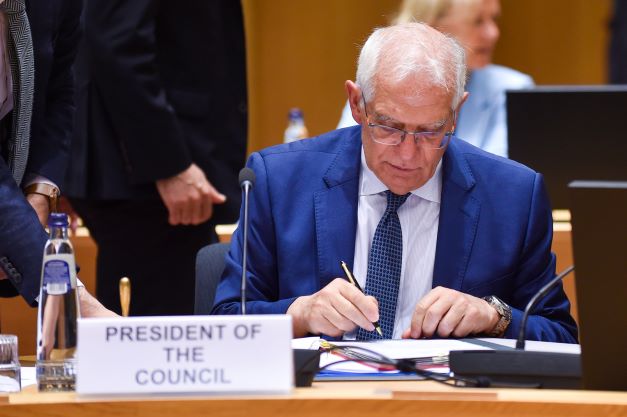