Likely to be Based on HHI HDC-3100 Design

The company said in a statement that the 116m multi-role vessels, which will be capable of conducting anti-air, anti-surface-, and anti-submarine-warfare operations, will be built at its shipyard in Ulsan, with delivery to the PN slated for 2025.

According to HHI, each of the vessels will have an overall beam of 14.6m, a range of 4,500nmi at a cruising speed of 15kts and be equipped with, among other things, a vertical launch system (VLS), anti-ship missiles, and an AESA radar to enhance detection and tracking of aerial threats.

No further details were provided by the company, including what model the corvettes will be based on, but the stated dimensions are similar to those of HHI’s HDC-3100 corvette, which is 114m long, 14.8m wide, displaces 3,100t and has a top speed of 25 knots. This indicates the PN corvettes are likely to be derivatives of the HDC-3100 model, which features a 16-cell VLS, and is armed with a 76mm naval gun in the primary position, a close-in weapon system in the aft section, and eight anti-ship missile launchers, according to computer-generated imagery provided by HHI.

Secretary of National Defense Delfin Lorenzana said that Manila has approved a total of PHP28 billion ($549 million) for the procurement of the corvettes, along with associated equipment and services, adding that the acquisition is part of the PN’s ‘Corvette Lot 1 Acquisition Project’. He also noted that, by acquiring the corvettes from HHI, the PN will ensure “commonality and interoperability” with the service’s two José Rizal class frigates, both of which were built by the South Korean company and inducted into the PN in July 2020 and March 2021, respectively. “With a common shipbuilder […] we expect ease of maintenance and repairs […] Like the two frigates, which were built in record time, we expect this acquisition project will likewise run smoothly,” Lorenzana was quoted by the state-owned Philippine News Agency (PNA) as saying.

The  José Rizal class frigates derive their design from the Incheon (FFX-1) frigate class operated by the Republic of Korea Navy. They were ordered by Manila under a PHP16 billion contract awarded to HHI in 2016, with an additional PHP2 billion set aside for weapon systems and munitions, according to the PNA. 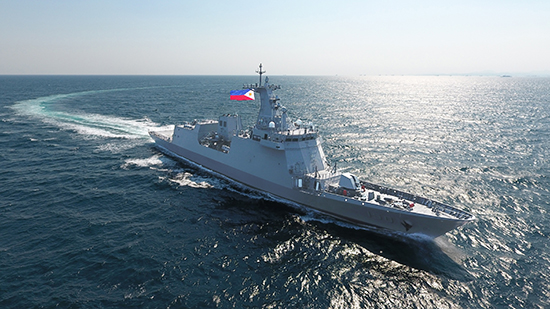 The new corvettes will most likely be based on HHI’s HDC-3100 design. (Image: HHI)